NZD/USD remains on track to negate the head-and-shoulders formation from earlier this year after defending the March low (0.6943), but failure to push above the March high (0.7307) may keep the exchange rate within a defined range as the key reversal pattern unravels.

The recent advance in NZD/USD looks to have sputtered ahead of the Federal Reserve interest rate decision as it pulls back from a fresh monthly high (0.7269), but more of the same from the Federal Open Market Committee (FOMC) may do little to derail the appreciation in the exchange rate as the central bank relies on its non-standard tools to achieve its policy targets.

It seems as though Chairman Jerome Powell and Co. will retain the current course for monetary policy after updating the Summary of Economic Projections (SEP) at the March meeting as the central bank aims to “achieve inflation moderately above 2 percent for some time so that inflation averages 2 percent over time.” The outcome based approach for monetary policy suggests the FOMC will stay on track to “increase our holdings of Treasury securities by at least $80 billion per month and of agency mortgage-backed securities by at least $40 billion per month” as the central bank anticipates a transitory rise in inflation to occur in 2021, and the committee may endorse a dovish forward guidance throughout the first half of the year as Fed officials are slated to update the SEP at the next quarterly meeting in June.

In turn, the decline from the yearly high (0.7465) may turn out to be a correction in the broader trend rather than a key reversal as NZD/USD trades back above the neckline, and the appreciation in the exchange rate may continue to coincide with the renewed tilt in retail sentiment as the crowding behavior from 2020 resurfaces. 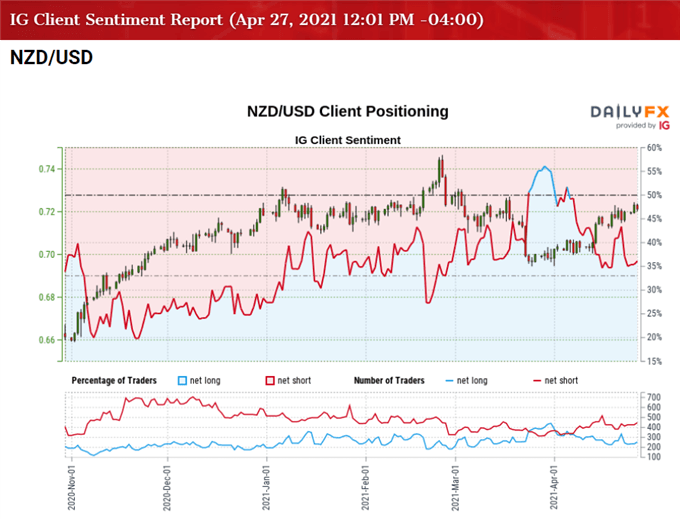 The IG Client Sentiment report shows 37.18% of traders are currently net-long NZD/USD, with the ratio of traders short to long standing at 1.69 to 1.

With that said, the decline from the yearly high (0.7465) may turn out to be a correction in the broader trend rather than a key reversal as the crowding behavior from 2020 resurfaces, but need a move above the March high(0.7307) to negate the head-and-shoulders formation as it largely lines up with the right-shoulder. 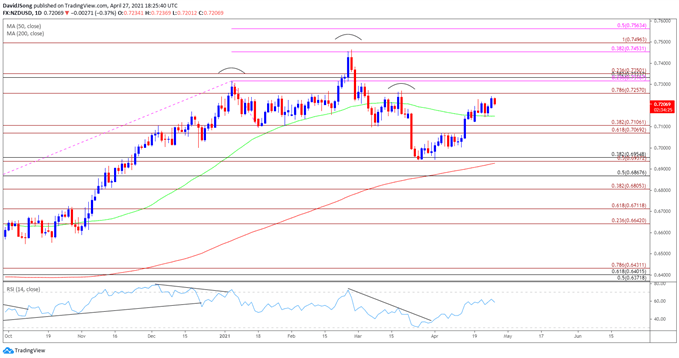