EUR/USD appears to be stuck in a narrow range as the European Central Bank (ECB) retains the current course for monetary policy, but the failed attempt to test the March high (1.2113) may push the exchange rate back within the descending channel from earlier this year as the Governing Council remains in no rush to switch gears.

EUR/USD seems to be unfazed by the ECB rate decision even though the Governing Council “expects purchases under the PEPP (pandemic emergency purchase programme) over the current quarter to continue to be conducted at a significantly higher pace than during the first months of the year,” and the exchange rate may continue to consolidate ahead of the Federal Reserve interest rate decision on April 28 as Chairman Jerome Powell and Co. are also expected to retain the current course for monetary policy.

As a result, the Federal Open Market Committee (FOMC) rate decision may do little to influence the near-term outlook for EUR/USD as Vice Chair Richard Clarida insists that “policy will not tighten solely because the unemployment rate has fallen below any particular econometric estimate of its long-run natural level,” and Fed officials may strike a dovish forward guidance throughout the first half of the year as the central bank plans to achieve above-target inflation.

More of the same from Chairman Powell and Co. may also generate a limited reaction in EUR/USD as the central bank sticks to the sidelines, but the exchange rate may make further attempts to break out of the downward trend from earlier this year as the crowding behavior from 2020 resurfaces. 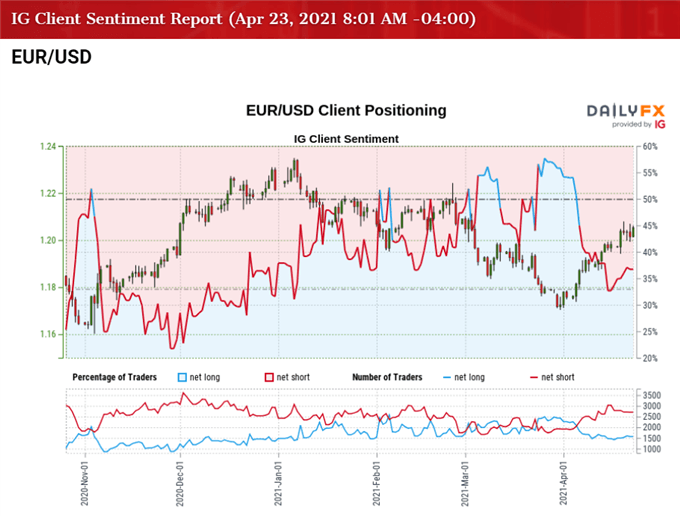 The IG Client Sentiment report shows only 35.00% of traders are currently net-long EUR/USD, with the ratio of traders short to long standing at 1.86 to 1.

The number of traders net-long is 5.22% lower than yesterday and 0.13% higher from last week, while the number of traders net-short is 8.08% higher than yesterday and 1.40% higher from last week. The marginal change in retail positioning comes amid the limited reaction to the ECB rate decision, and it looks as though the extreme reading in the IG Client Sentiment will persist as 34.43% of traders were net-long EUR/USD earlier this week.

With that said, it remains to be seen if EUR/USD will make further attempts to break out of the downward trending channel from earlier this year as the crowding behavior from 2020 resurfaces, but lack of momentum to test the March high (1.2113) may continue to generate range bound conditions as the ECB stays on track to boost the pace of the PEPP in the second quarter of 2021.