USD/CAD bounces back from a fresh monthly low (1.2460) in an attempt to retrace the decline following the Bank of Canada (BoC) interest rate decision, but failure to preserve the opening range for April may push the exchange rate towards the March low (1.2365) as the central bank tapers its quantitative easing (QE) program.

USD/CAD has slipped back below the 50-Day SMA (1.2576) as the BoC announces that “weekly net purchases of Government of Canada bonds will be adjusted to a target of $3 billion,” and the exchange rate may continue to depreciate over the remainder of the month as the moving average still reflects a negative slope.

It seems as though the BoC will scale back its emergency measures throughout the remainder of the year as “global economic growth is stronger than was forecast in the January Monetary Policy Report (MPR),” and the central bank appears to be on track to gradually alter the forward guidance over the coming months as “inflation should return to 2 per cent on a sustained basis some time in the second half of 2022.”

In turn, the BoC may switch gears later this year as Governor Tiff Macklem and Co. insist that “further adjustments to the pace of net purchases will be guided by Governing Council’s ongoing assessment of the strength and durability of the recovery,” and the looming change in monetary policy may keep USD/CAD under pressure especially as the Federal Reserve stays on course to “increase our holdings of Treasury securities by at least $80 billion per month and of agency mortgage-backed securities by at least $40 billion per month.”

However, the tilt in retail sentiment looks poised to persist as traders have been net-long USD/CAD since May 2020, with the IG Client Sentiment report showing 71.72% of traders currently net-long the pair as the ratio of traders long to stands short at 2.54 to 1. 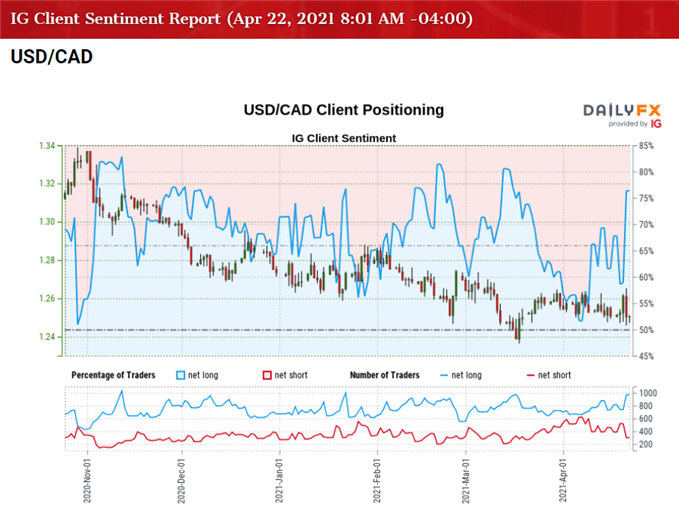 The number of traders net-long is 36.24% higher than yesterday and 12.36% higher from last week, while the number of traders net-short is 36.05% lower than yesterday and 18.36% lower from last week. The jump in net-long interest has fueled the crowding behavior as 66.46% of traders were net-long USD/CAD at the start of the week, while the decline in net-short position could be a function of profit taking behavior as the exchange rate attempts to retrace the decline following the BoC rate decision.

With that said, the rebound from the March low (1.2365) may end up being a correction in the broader trend rather than a shift in market behavior as the tilt in retail sentiment persists, and recent price action raises the scope for a further decline in USD/CAD as the exchange rate fails to preserve the opening range for April.