NZD/USD Trades Within March Range Ahead of RBNZ Rate Decision

NZD/USD retains the range-bound price action from earlier this week amid the limited reaction to the Federal Reserve Minutes, and the exchange rate may continue to consolidate ahead of the Reserve Bank of New Zealand (RBNZ) interest rate decision on April 14 as the central bank is widely expected to keep the official cash rate (OCR) at the record low of 0.25%.

NZD/USD Trades Within March Range Ahead of RBNZ Rate Decision

NZD/USD appears to be stuck in a narrow range after defending the March low (0.6943), but recent developments in the Relative Strength Index (RSI) raises the scope for a larger rebound in the exchange rate as the oscillator reverses ahead of oversold territory to break out of the downward trend from earlier this year.

It remains to be seen if the RBNZ rate decision will influence the near-term outlook for NZD/USD as the central bank insists that “it would not change the stance of monetary policy until it had confidence that it is sustainably achieving the consumer price inflation and employment objectives,” and it seems as though Governor Adrian Orr and Co. are in no rush to deploy more unconventional tools as the committee “expects to see the full pass-through of lower funding costs to borrowing rates.”

As a result, the RBNZ may stick to the sidelines as “the Committee agreed that current monetary policy settings were appropriate to achieve its inflation and employment remit,” and the wait-and-see approach may keep NZD/USD afloat even though the central bank remains “prepared to lower the OCR to provide additional stimulus if required.”

In turn, NZD/USD may continue to track the March range as the RSI shows the bearish momentum abating, but the broader outlook remains mired by a head-and-shoulders formation as former support appears to be acting as resistance. 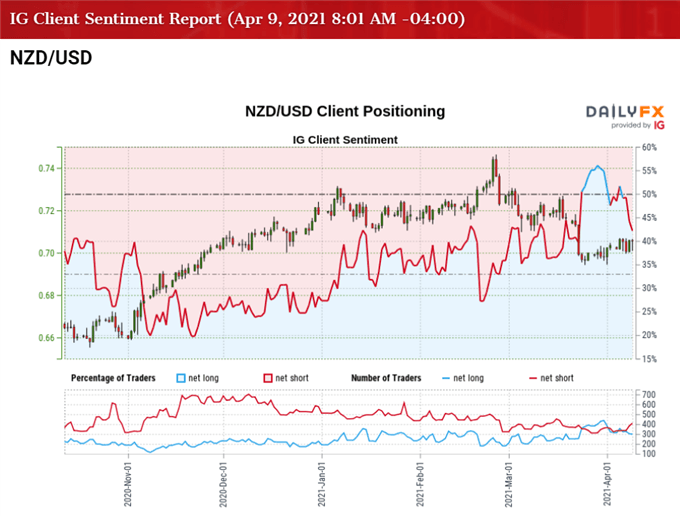 Nevertheless, the recent flip in retail sentiment continues to dissipate as the IG Client Sentiment Report shows 42.73% of traders current net-long NZD/USD, with the ratio of traders short to long standing at 1.34 to 1.

The number of traders net-long is 8.49% lower than yesterday and 13.65% lower from last week, while the number of traders net-short is 8.02% lower than yesterday and 16.42% higher from last week. The decline in net-long position comes as NZD/USD appears to be stuck in a narrow range, while the surge in net-short interest has brought back the crowding behavior seen in 2020 as 49.57% of traders were net-long the pair earlier this week.

With that said, NZD/USD may continue to consolidate ahead of the RBNZ meeting as the crowding behavior from last year resurfaces, but the former support zone appears to be acting as resistance as the exchange rate trades within a head-and-shoulders formation.