The USD/JPY rally unravels following the failed attempt to test the March 2020 high (111.72), and recent developments in the Relative Strength Index (RSI) indicate a further decline in the exchange rate as the oscillator falls back from overbought territory to reflect a textbook sell signal.

USD/JPY extends the series of lower highs and lows from earlier this week to largely track the pullback in longer-dated US Treasury yields, and the bearish price sequence may push the exchange rate towards former resistance as it searches for support.

It remains to be seen if the decline from the March high (110.97) will turn out to be a correction or a shift in trend as a ‘golden cross’ takes shape in 2021, and the broader rise in longer-dated Treasury yields may keep the exchange rate afloat as the above-forecast print for US Non-Farm Payrolls (NFP) puts pressure on the Federal Reserve to scale back its emergency measures.

In turn, the FOMC Minutes may keep USD/JPY under pressure if Chairman Jerome Powell and Co. show a greater willingness to address the rise longer-dated US Treasury via ‘Operation Twist,’ but more of the same from the Fed may prop up the exchange rate as fresh data prints coming out of the US economy point to a stronger recovery. 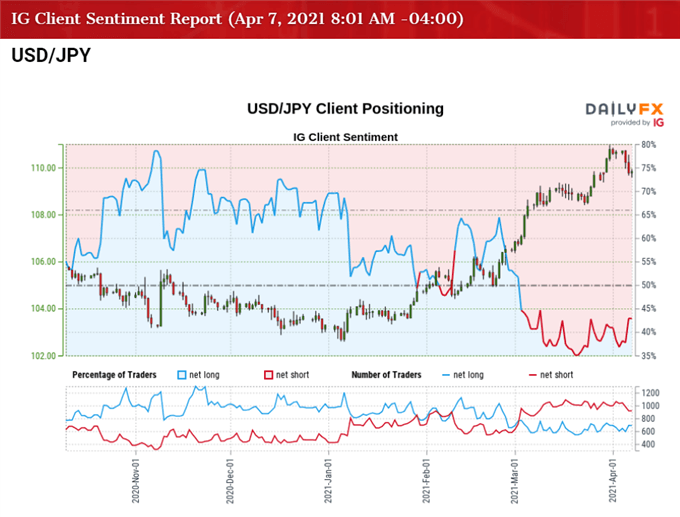 Meanwhile, the appreciation in USD/JPY has spurred a shift in retail sentiment as traders flip net-short for the second time this year, with the IG Client Sentiment report showing 43.85% of traders currently net-long the pair as the ratio of traders short to long at 1.28 to 1.

The number of traders net-long is 12.46% higher than yesterday and 10.09% higher from last week, while the number of traders net-short is 5.93% lower than yesterday and 3.80% lower from last week. The rise in net-long position has helped to alleviate the tilt in retail sentiment as 40.56%, while the decline in net-short interest could be a function of profit taking behavior as USD/JPY bounce back from a fresh weekly low (109.58).

With that said, the USD/JPY rally indicates a potential shift in market behavior amid the flip in retail sentiment, but recent developments in the Relative Strength Index (RSI) indicate a further decline in the exchange rate as the oscillator falls back from overbought territory to snap the upward trend established at the start of the year.