AUD/USD continues to trade within a head-and-shoulders formation amid the limited reaction to the Reserve Bank of Australia (RBA) interest rate decision, but lack of momentum to close below the neckline may generate a larger rebound in the exchange rate as it extends the series of higher highs and lows from the start of the month.

AUD/USD approaches the 50-Day SMA (0.7714) as it trades to a fresh weekly high (0.7677), and recent developments in the Relative Strength Index (RSI) raises the scope for a further advance in the exchange rate as the indicator breaks out of the downward trend from earlier this year.

It remains to be seen if the decline from the February high (0.8007) will turn out to be a correction in the broader trend or a change in AUD/USD behavior as the RBA emphasizes that “the initial $100 billion government bond purchase program is almost complete and the second $100 billion program will commence next week,” and Governor Philip Lowe and Co. may keep the door open to further support the Australian economy as “the Bank is prepared to undertake further bond purchases if doing so would assist with progress towards the goals of full employment and inflation.”

However, the RBA appears to be on a preset course as “the recovery is expected to continue, with above-trend growth this year and next,” and the central bank may continue to acknowledge that “the Australian dollar remains in the upper end of the range of recent years” at its next meeting on May 4 as the Federal Reserve stays on track to “increase our holdings of Treasury securities by at least $80 billion per month and of agency mortgage-backed securities by at least $40 billion per month.”

Until then, AUD/USD may continue to trade within the head-and-shoulders formation amid the lack of momentum to break below the neckline, but the recent flip in retail sentiment appears to be dissipating like the activity seen in 2020. 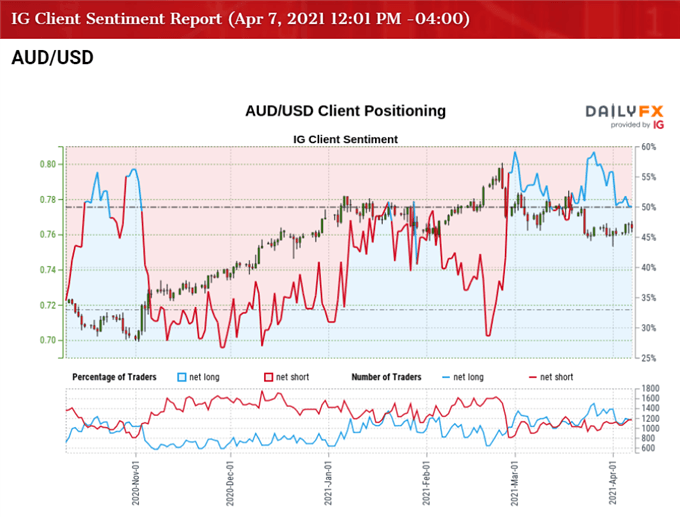 The IG Client Sentiment report shows 54.49% of traders are currently net-long AUD/USD, with the ratio of traders long to short standing at 1.20 to 1.

The number of traders net-long is 1.22% higher than yesterday and 3.14% lower from last week, while the number of traders net-short is 1.33% lower than yesterday and 8.12% lower from last week. The decline in net-long position comes as AUD/USD extends the series of higher highs and lows from the start of the month, while the drop in net-short interest has fueled a further shift in retail sentiment as 52.54% of traders were net-long the pair earlier this week.

With that said, AUD/USD may continue to trade within the head-and-shoulders formation as the recent weakness in the exchange rate spurs a shift in retail sentiment, but the decline from the February high (0.8007) may end up being a correction in the broader trend rather than a change in behavior amid the failed attempt to close below the neckline.