EUR/USD attempts to retrace the decline from the previous month even as European Central Bank (ECB) officials endorse a dovish forward guidance, and looming developments in the Relative Strength Index (RSI) may indicate a further appreciation in the exchange rate if the oscillator breaks out of the downward trend from earlier this year.

EUR/USD seems to have reversed course ahead of the November low (1.1603) as it initiates a series of higher highs and lows following the limited reaction to the US Non-Farm Payrolls (NFP) report, but the broader outlook remains geared towards the downside as the exchange rate trades back within the downward trending channel from earlier this year.

It remains to seen if the account of the ECB’s March meeting will influence the near-term outlook for EUR/USD amid the recent slowdown in the pace of the pandemic emergency purchase programme (PEPP), but the central bank appears to be on track to retain the current course for monetary policy as Chief Economist Philip Lane argues that “the increase in inflation during 2021 can be best interpreted as the unwinding of disinflationary forces that took hold in 2020 and does not constitute the basis for a sustained shift in inflation dynamics.”

In a recent blog post, Lane warns that “the projected medium-term inflation rate remains subdued amid still-weak demand and substantial slack in labour and product markets,” with the official going onto say that “inflation is projected to reach only 1.4 per cent by 2023, well below the Governing Council’s inflation aim.”

In turn, the account of the ECB meeting may strike a similar tone as the central bank relies on its non-standard tools to achieve its one and only mandate for price stability, and the Euro may face headwinds ahead of the next interest rate decision on April 22 as “the Governing Council expects purchases under the PEPP over the next quarter to be conducted at a significantly higher pace than during the first months of this year.”

Until then, the Euro stands at risk of facing headwinds as President Christine Lagarde and Co. retain a dovish forward guidance for monetary policy, and the decline from the January high (1.2350) may turn out to be a change in EUR/USD behavior rather than a correction in the broader trend as the depreciation in the exchange rate spurs a shift in retail sentiment, with traders flipping net-long for the fifth time in 2021. 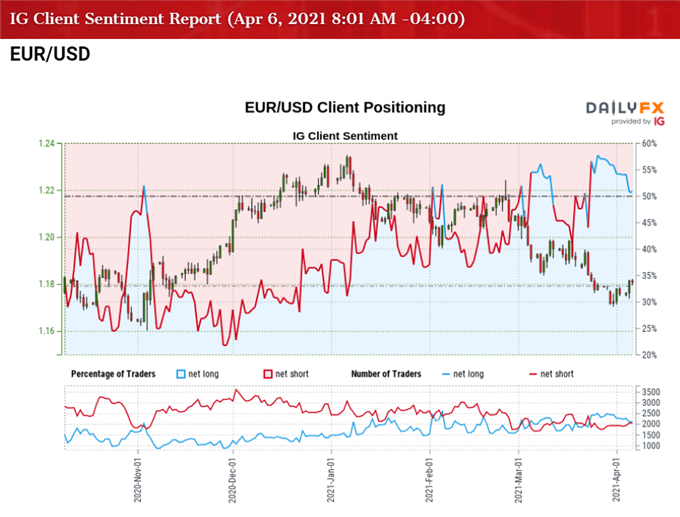 The IG Client Sentiment report shows 50.53% of traders are currently net-long EUR/USD, with the ratio of traders long to short standing at 1.02 to 1.

The number of traders net-long is 6.55% lower than yesterday and 7.90% lower from last week, while the number of traders net-short is 6.03% higher than yesterday and 5.37% higher from last week. The decline in net-long interest has alleviated the recent flip in retail sentiment 56.39% of traders were net-long EUR/USD during the previous week, while the rise in net-short position comes as the exchange rate trades back within the descending channel from earlier this year.

With that said, the recent rebound in EUR/USD may end up being short lived as the ECB plans to ramp up the pace of the PEPP throughout the second quarter of 2021, but looming developments in the Relative Strength Index (RSI) may foreshadow a larger rebound in the exchange rate if the oscillator breaks out of the downward trend from earlier this year.