EUR/USD trades to a fresh monthly low (1.1704) as it snaps the range bound price action carried over from late last week, but the Relative Strength Index (RSI) appears to be diverging with price as the weakness in the exchange rate fails to push the indicator into oversold territory.

Recent price action indicates a further decline in EUR/USD as it extends the series of lower highs and lows from the start of the week, but fresh updates coming out of the European Central Bank (ECB) appear to be shoring up the Euro as the central bank scales back the pace of the pandemic emergency purchase programme (PEPP) for the first time since the consolidated financial statement for February 26. 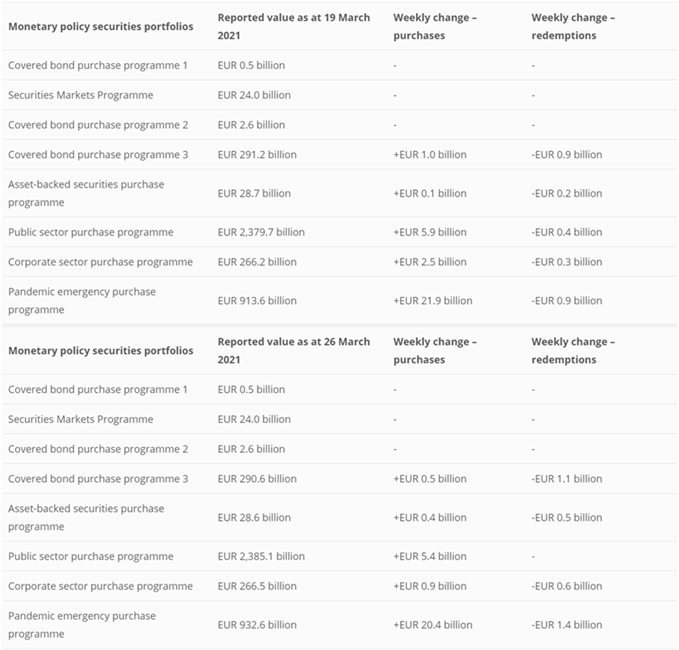 EUR/USD attempts to retrace the decline from earlier this week as the PEPP widens EUR 20.4 billion in the week ending March 26 after expanding EUR 21.9 billion the week prior, and it remains to be seen if the pace of asset purchases have reached its peak as the update to the Euro Area Consumer Price Index (CPI) shows the headline reading widened to 1.3% from 0.9% in February.

However, the ECB may continue to endorse a dovish forward guidance as the Economic Bulletin for March underscores an adjustment in the weighing for the Harmonised Index of Consumer Prices (HICP), and the Governing Council may retain the current course for monetary policy at its next interest rate decision on April 22 as President Christine Lagardewarns of a technical recession.

Until then, the Euro stands at risk of facing headwinds if the ECB ramps up the pace of the PEPP, and the decline from the January high (1.2350) may turn out to be a change in EUR/USD behavior rather than a correction in the broader trend as the depreciation in the exchange rate spurs a shift in retail sentiment, with traders flipping net-longfor the fifth time in 2021. 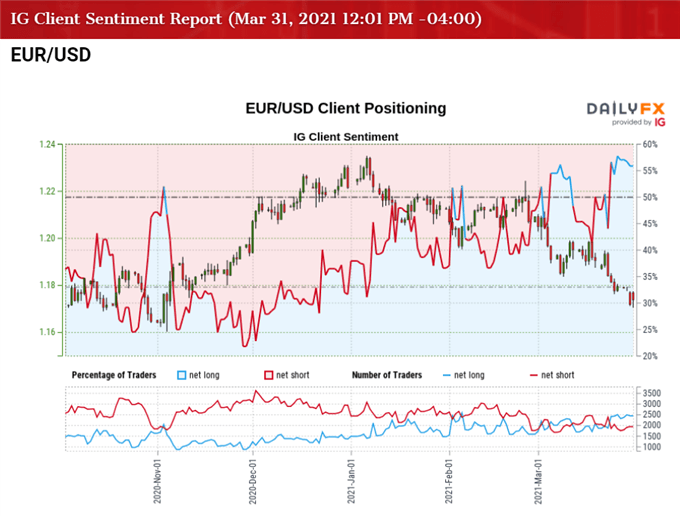 The IG Client Sentiment report shows 56.39% of traders are currently net-long EUR/USD, with the ratio of traders long to short standing at 1.29 to 1.

The number of traders net-long is 8.11% higher than yesterday and 5.51% higher from last week, while the number of traders net-short is 4.06% higher than yesterday and 3.98% lower from last week. The rise in net-long interest has done little to alleviate the shift in retail sentiment as 54.83% of traders were net-long EUR/USD earlier this week, while the decline in net-short interest could be a function of profit taking behavior as the exchange rate attempts to bounce back from a fresh monthly low (1.1704).

With that said, the decline from the January high (1.2350) may turn out to be a change in EUR/USD behavior rather than a correction in the broader trend as the exchange rate trades below the 200-Day SMA (1.1865) for the first time since May 2020, but the Relative Strength Index (RSI) appears to be diverging with price as the weakness in the exchange rate fails to push the indicator into oversold territory.