NZD/USD appears to be on track to test the December low (0.7002) as it fails to defend the opening range for March, and recent price action warns of a further decline in the exchange rate as a head-and-shoulders formation appears to be taking shape.

NZD/USD appears to be under pressure despite the pullback in US Treasury yields as New Zealand extends the ‘bright-line test,’ with Prime Minister Jacinda Ardern arguing that “the last thing our economy and homeowners needs is a dangerous housing bubble.”

The decision to widen the scope of the capital gains tax on investment property to 10 years from 5 years comes as the Reserve Bank of New Zealand (RBNZ) is directed to “have regard to house price sustainability when making its financial stability policy decisions,” and it remains to be seen if the central bank will take additional steps to avoid a housing market bubble after announcing more stringent loan-to-value ratio (LVR) restrictions in February.

However, the 4Q Gross Domestic Product (GDP) report may put pressure on the RBNZ to further support the economy amid the unexpected contraction in the growth rate, and Governor Adrian Orr and Co. may keep the door open to deploy more emergency tools as “the operational work to enable the OCR (official cash rate) to be taken negative if required is now completed.”

In turn, the New Zealand Dollar may face headwinds ahead of the next RBNZ meeting on April 14 as the central bank “remains prepared to provide additional monetary stimulus if necessary,” but the decline from the February high (0.7465) may turn out to be a correction in the broader trend rather than a change in market behavior as the US Dollar still reflects an inverse relationship with investor confidence. 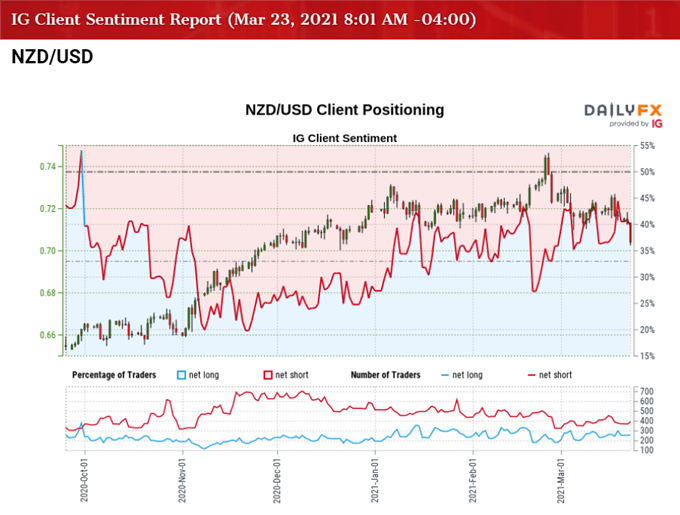 At the same time, the tilt in retail sentiment persists as traders have been net-short NZD/USD since October, with the IG Client Sentiment report showing 45.77% of traders currently net-long the pair as the ratio of traders short to long stands at 1.19 to 1.

The number of traders net-long is 10.79% higher than yesterday and 17.56% higher from last week, while the number of traders net-short is 8.29% lower than yesterday and 22.83% lower from last week. The rise in net-long position has helped to alleviate the crowding behavior as only 39.16% of traders were net-long NZD/USD last week, while the decline in net-short interest could be a function of profit taking behavior as the exchange rate trades to a fresh yearly low (0.7020).

With that said, it remains to be seen if thedecline from the February high (0.7465) will turn out to be a correction in the broader trend or a change in market behavior as a head-and-shoulders formation takes shape in March, and the exchange rate appears to be on track to test the December low (0.7002) amid the break below the neckline.