EUR/USD gives back the advance following the Federal Reserve interest rate decision as European Central Bank President Christine Lagarde warns that the Euro Area “is likely to contract again in the first quarter of the year after declining by 0.7 per cent in the fourth quarter of 2020,” but the exchange rate may continue to track the March range as it manages to hold above the 200-Day SMA (1.1843).

Recent developments coming out of the ECB appear to be dragging on EUR/USD as the central bank steps up the pace of the pandemic emergency purchase programme (PEPP), and recent remarks from President Lagarde suggest the Governing Council is in no rush to alter the path for monetary policy even though European authorities prepare to distribute the Next Generation EU recovery fund in 2021.

During the testimony in front of the Committee on Economic and Monetary Affairs of the European Parliament, President Lagarde emphasized that the “economic outlook for the euro area remains surrounded by uncertainty due to the dynamics of the pandemic and the speed of vaccination campaigns,” with the central bank head warning of a technical recession as GDP is now expected to contract for two consecutive quarters.

Nevertheless, President Lagarde went onto say that “the ongoing vaccination campaigns, together with the gradual relaxation of containment measures underpin expectation of a firm rebound in economic activity in the second half of 2021,” but it seems as though the Governing Council will continue to utilize its emergency measures to support the Euro Area as “purchases under the PEPP over the next quarter to be conducted at a significantly higher pace than during the first months of this year.”

In turn, the Euro may face headwinds ahead of the next ECB interest rate decision on April 22 as President Lagarde pledges to “monitor developments in the exchange rate regarding their possible implications for the medium-term inflation outlook,” with the recent weakness EUR/USD generating a flip in retail sentiment as traders turn net-long the pair for the fifth time in 2021. 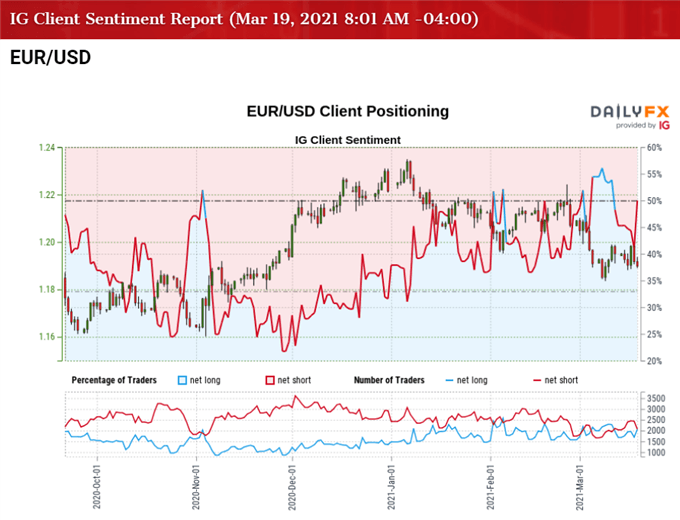 The IG Client Sentiment report shows 51.89% of traders are currently net-long EUR/USD, with the ratio of traders long to short standing at 1.08 to 1.

The number of traders net-long is 14.70% higher than yesterday and 14.41% higher from last week, while the number of traders net-short is 7.97% lower than yesterday and 0.77% higher from last week. The rise in net-long position appears to have fueled the shift in retail sentiment as 45.55% of traders were net-long EUR/USD earlier this week, while the marginal increase in net-short interest comes as the exchange rate gives back the advance following the Fed rate decision.

It remains to be seen if the crowding behavior from 2020 will resurface as Chairman Jerome Powell and Co. see the benchmark interest rate sitting near zero through 2023, and the shift in retail sentiment will be short-lived like the behavior seen earlier this year.

With that said, key market themes may continue to influence EUR/USD as the US Dollar still reflects an inverse relationship with investor confidence, and the decline from the January high (1.2350) may turn out to be a correction in the broader trend rather than a change in behavior as the exchange rate holds above the 200-Day SMA (1.1843).