The price of oil extends the series of lower highs and lows from earlier this week as US crude inventories widen for the fourth consecutive week, but current market conditions may keep oil prices afloat as it continues to track the upward trend established in November.

The broader outlook for the price of oil remains constructive as it takes out the 2019 high ($66.60) in March, and crude may continue to exhibit a bullish trend in 2021 as Saudi Arabia stays on track to reduce supply by 1 million b/d until April.

Looking ahead, it remains to be seen if the Organization of the Petroleum Exporting Countries (OPEC) will continue to regulate the energy market in 2021 as the last Monthly Oil Market Report (MOMR) states that “in 2021, world oil demand is forecast to increase by 5.9 mb/d, reflecting the positive economic impact on oil demand during 2H21.” 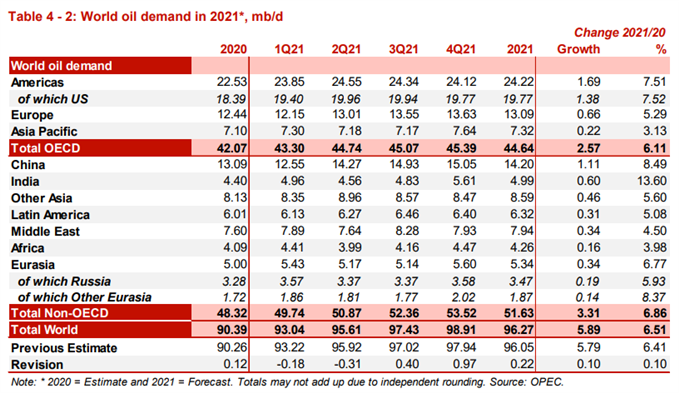 The report goes onto say that “total oil demand is foreseen to reach 96.3 mb/d with most consumption appearing in the 2H21,” which compares to the 96.05 mb/d projection in February, and signs of stronger demand may encourage OPEC and its allies to gradually restore production over the course of 2021 as “2H21 oil demand was adjusted higher to reflect an expectation of a solid economic recovery and the positive impact from vaccination rollouts.”

However, the fresh data prints coming out of the US may become a growing concern for OPEC and its allies as crude inventories climb 2.396M in the week ending March 12 after expanding 13.798M the week prior to push stockpiles above 500K for the first time in 2021.

In turn, OPEC and its allies may retain the current level of output at the next Joint Ministerial Monitoring Committee (JMMC) on March 31 amid the ongoing rise in crude inventories, and current market conditions may keep the price of oil afloat as US production sits at its lowest level since 2018.

The update from the Energy Information Administration (EIA) also showed weekly field output holding steady at 10,900K after recovering from the weather-related disruptions from earlier this year, and the price of oil may continue to exhibit a bullish behavior after taking out the 2019 high ($66.60) as long as it preserves the upward trend established in November.

With that said, the decline from the monthly high ($67.98) may turn out to be an exhaustion in the broader trend rather than a change in market behavior as OPEC and its allies regulate production, but developments in the Relative Strength Index (RSI) indicates a larger correction in the price of oil as the oscillator continues to diverge with price and continues to track the downward trend carried over from the previous month.