AUD/USD trades marginally lower from the start of the week as market participants gear up for the Federal Reserve interest rate decision, but more of the same from Chairman Jerome Powell and Co. may keep key market themes in place as major central banks rely on their emergency tools to achieve their policy targets.

AUD/USD continues to bounce along the 50-Day SMA (0.7738) after defending the 2021 low (0.7564), and the decline from the February high (0.8007) may turn out to be an exhaustion in the broader trend rather than a shift in behavior as long as the Federal Open Market Committee (FOMC) stays on track to “increase our holdings of Treasury securities by at least $80 billion per month and of agency mortgage-backed securities by at least $40 billion per month.”

It remains to be seen if the FOMC will utilize the Summary of Economic Projections (SEP) to signal a looming shift in monetary policy as Congress passes the $1.9 trillion coronavirus recovery package, but the rise in longer-dated US Treasury yields may encourages Fed officials to endorse a dovish forward guidance as the Reserve Bank of Australia (RBA) acknowledges that “market participants had brought forward their expectations for an increase in policy rates in a number of economies, including Australia.”

The minutes from the RBA’s March meeting emphasizes that “this change appeared to be sooner than implied by market participants' own inflation expectations and the forward guidance from central banks,” with Governor Philip Lowe and Co. going onto say that “very significant monetary support would be required for some time, as it would be some years before the Bank's goals for inflation and unemployment were achieved.”

The FOMC may strike a similar tone as Chairman Powell warns “it’s not at all likely that we’d reach maximum employment this year,” and more of the same from Fed officials may keep key market themes in place as major central banks continue to rely on their emergency tools to achieve their policy targets.

In turn, swings in risk appetite may continue to sway AUD/USD as the US Dollar still reflects an inverse relationship with investor confidence, with the crowding behavior from 2020 resurfacing as traders flip net-short AUD/USD. 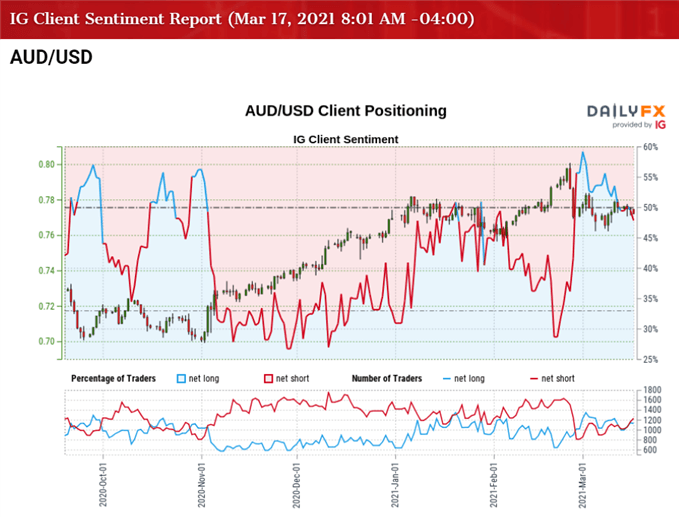 The IG Client Sentiment report shows 49.88% of traders are currently net-long AUD/USD, with the ratio of traders short to long standing at 1.00 to 1.

The number of traders net-long is 1.62% lower than yesterday and 2.01% higher from last week, while the number of traders net-short is 7.56% higher than yesterday and 6.53% higher from last week. The rise in net-long position has helped to alleviate the tilt in retail sentiment as 48.90% of traders were net-long the pair during the previous week, while the rise in net-short interest comes as consolidates within the monthly range.

With that said, AUD/USD may continue to exhibit a bullish trend as long as the FOMC retains the current course for monetary policy, and the decline from the February high (0.8007) may turn out to be an exhaustion in the broader trend rather than a shift in AID/USD behavior as the tilt in retail sentiment returns.