USD/CAD is little changed from the start of the week as it struggles to retrace the decline following Canada’s Employment report, but the key event risk on tap for later this week may sway the near-term outlook for the exchange rate if the Federal Reserve adjusts the forward guidance for monetary.

USD/CAD holds near the yearly low (1.2441) ahead of the update to Canada’s Consumer Price Index (CPI), which is anticipated to show the headline reading for inflation climbing to 1.3% from 1.0% per annum in February, but the Federal Open Market Committee (FOMC) interest rate decision may overshadow the key data print as the central bank is slated to release the Summary of Economic Projection (SEP).

It remains to be seen if Fed officials will utilize the interest rate dot-plot to signal a looming shift in policy as Congress passes the $1.9 trillion coronavirus recovery package, and projections for a more robust recovery may generate a bullish reaction in the US Dollar as it fuels speculation for a taper tantrum.

However, more of the same from the FOMC may keep key market themes in place as Chairman Jerome Powell warns that “it’s not at all likely that we’d reach maximum employment this year,” and the US Dollar may continue to reflect an inverse relationship with investor confidence as long as the FOMC stays on track to “increase our holdings of Treasury securities by at least $80 billion per month and of agency mortgage-backed securities by at least $40 billion per month.”

In turn, USD/CAD may continue to exhibit the bearish behavior seen in 2020 as it trades to a fresh yearly low (1.2441) in March, but the tilt in retail sentiment looks poised to persist as traders have been net-long the pair since May 2020. 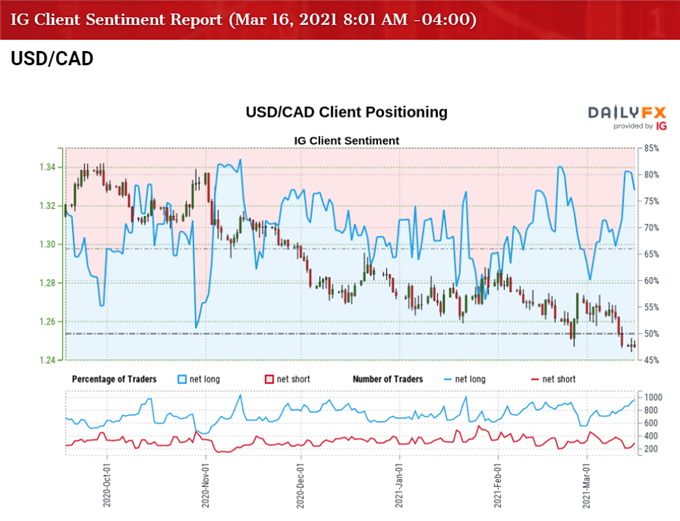 The IG Client Sentiment report shows 75.50% of traders are currently net-long USD/CAD, with the ratio of traders long to short standing at 3.08 to 1.

The number of traders net-long is 6.12% higher than yesterday and 31.17% higher from last week, while the number of traders net-short is 2.13% lower than yesterday and 9.83% lower from last week. The jump in net-long interest has fueled the crowding behavior as 68.91% of traders were net-long USD/CAD last week, while the decline in net-short interest could be a function of profit taking behavior as the exchange rate trades to a fresh yearly low (1.2441) in March.

With that said, swings in risk appetite may continue to sway USD/CAD as major central banks rely on their emergency tools to achieve their policy targets, and the pullback from the 50-Day SMA (1.2677) may continue to generate fresh yearly lows in the exchange rate if the FOMC retains a dovish forward guidance for monetary policy.