NZD/USD appears to be stuck in a narrow range after defending the 20201 low (0.7096), but the pullback from the February high (0.7465) may turn out to be an exhaustion in the broader trend rather than a change in behavior as the Federal Reserve is expected to retain the current path for monetary policy.

NZD/USD pares the rebound from the monthly low (0.7099) as it struggles to push back above the 50-Day SMA (0.7214), and it remains to be seen if the Federal Reserve interest rate decision on March 17 will influence currency markets as the central bank is slated to update the Summary of Economic Projections (SEP).

Fresh forecasts from Fed officials may overshadow New Zealand’s Gross Domestic Product (GDP) report if the central bank alters the forward guidance for monetary, but more of the same from Chairman Jerome Powell and Co. may keep key market trends in place as the Reserve Bank of New Zealand (RBNZ) insists that the “current monetary policy settings were appropriate to achieve its inflation and employment remit.”

The Mission Concluding Statement from the International Monetary Fund (IMF) staff struck a similar tone as the group states that “while no additional stimulus is needed at the current juncture, fiscal and monetary support should not be withdrawn prematurely given the still-uneven recovery and continued high uncertainty,” and the RBNZ may continue to endorse a wait-and-see approach at its next meeting on April 14 as the central bank carries out the Funding for Lending Programme (FLP) unveiled at its last meeting in 2020.

In turn, key market themes may continue to influence NZD/USD as the US Dollar still reflects an inverse relationship with investor confidence, and the tilt in retail sentiment also looks poised to persist as traders have been net-short since October. 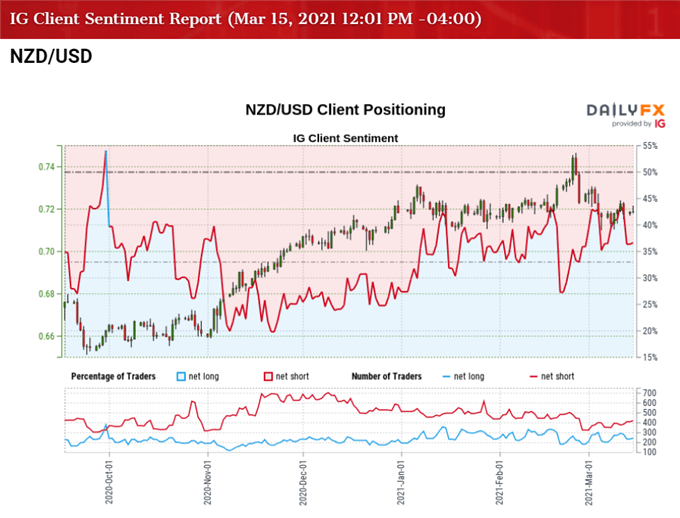 The IG Client Sentiment report shows only 37.82% of traders are net-long NZD/USD, with the ratio of traders short to long standing at 1.64 to 1.

With that said, NZD/USD may continue to consolidate ahead of the key event risks on tap for later this week as it struggles to push back above the 50-Day SMA (0.7214), but the decline from the February high (0.7465) may turn out to be a correction in the broader trend rather than a change in NZD/USD behavior like the pullback from the January high (0.7315).