USD/CAD trades to a fresh monthly low (1.2569) following the limited reaction to the Bank of Canada (BoC) interest rate decision, and the advance from the February low (1.2468) may turn out to be correction in the broader trend rather than a change inbehavior like the price action seen in 2020.

USD/CAD snaps the monthly opening range for March as it continues to pullback from the 50-Day SMA (1.2694), and the updated to Canada’s Employment report may keep the exchange rate under pressure as job growth is expected to rebound in February.

Canada is projected to add 75K jobs after shedding 212.8K jobs in January, and a positive development may encourage the BoC to retain the current course for monetary policy as “the Governing Council judges that the recovery continues to require extraordinary monetary policy support.”

It seems as thought the BoC is in no rush to scale back its emergency measures as the central bank plans to carry out its quantitative easing (QE) program “at its current pace of at least $4 billion per week,” but it remains to be seen if the central bank will adjust the forward guidance at the next meeting on April 21 as Governor Tiff Macklem and Co. are scheduled to update the Monetary Policy Report (MPR).

Until then, key market themes may sway USD/CAD as major central banks rely on their balance sheet to achieve their policy targets, and the US Dollar may continue to reflect an inverse relationship with investor confidence as the Federal Reserve stays on track to “increase our holdings of Treasury securities by at least $80 billion per month and of agency mortgage-backed securities by at least $40 billion per month.” 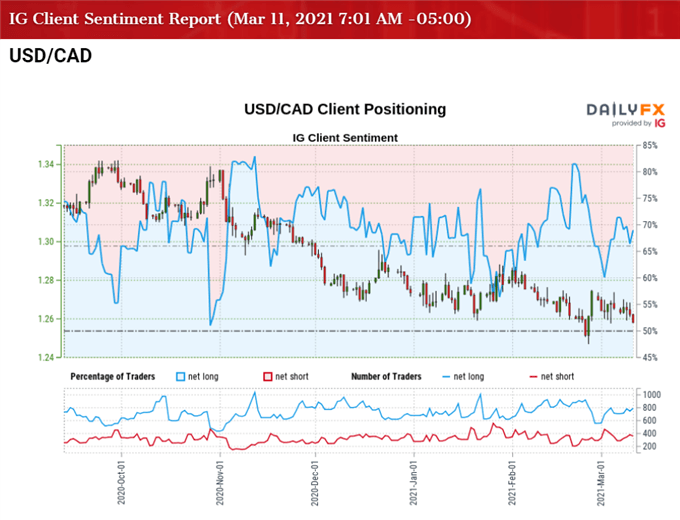 At the same time, the tilt in retail sentiment looks poised to persist as traders have been net-long USD/CAD since May 2020, with the IG Client Sentiment report showing 68.91% of traders currently net-long the pair as the ratio of traders long to short stands at 2.22 to 1.

The number of traders net-long is 10.38% higher than yesterday and unchanged from last week, while the number of traders net-short is 1.34% higher than yesterday and 8.01% lower from last week. The rise in net-long interest has fueled the crowding behavior as 67.87% of traders were net-long USD/CAD ahead of the BoC rate decision, while the decline in net-short interest could be a function of profit-taking behavior as the exchange rate trades to a fresh monthly low (1.2569).

With that said, key market themes may continue to influence USD/CAD amid the ongoing tilt in retail sentiment, and the advance from the February low (1.2468) may turn out to be correction in the broader trend rather than a change inbehavior like the price action seen in 2020.