EUR/USD appears to be reversing course ahead of the 200-Day SMA (1.1821) as it attempts to retrace the decline from earlier this week, and it remains to be seen if the European Central Bank (ECB) interest rate decision will influence the near-term outlook for the exchange rate as the Governing Council is expected to retain the current course for monetary policy.

EUR/USD struggles to extend the series of lower highs and lows carried over from the previous week, with the recent weakness in the US Dollar largely associated with a rise in global equity prices, and more of the same from the ECB may keep key market themes in place as major central banks rely on their emergency tools to achieve their policy targets.

The fresh forecasts from the Organisation for Economic Co-operation and Development (OECD) may keep the ECB on the sidelines as the group insists that “the current very accommodative monetary policy stance should be maintained,” and the Governing Council may merely attempt to buy time at its meeting on March 11 as“the risks surrounding the euro area growth outlook remain tilted to the downside but less pronounced.”

It seems as though the ECB is on a preset course after expanding/extending the pandemic emergency purchase programme (PPEP) at its last meeting for 2020 asthe central bank pledges to “purchase flexibly according to market conditions,” and President Christine Lagarde and Co. may endorse a wait-and-see approach over the coming months as European authorities prepare to distribute the Next Generation EU (NGEU) programme in 2021.

In turn, swings in risk appetite may continue to sway EUR/USD as the US Dollar continues to reflect an inverse relationship with investor confidence, but the recent selloff in the exchange rate has triggered a shift in retail sentiment as traders flip net-long for the third time in 2021. 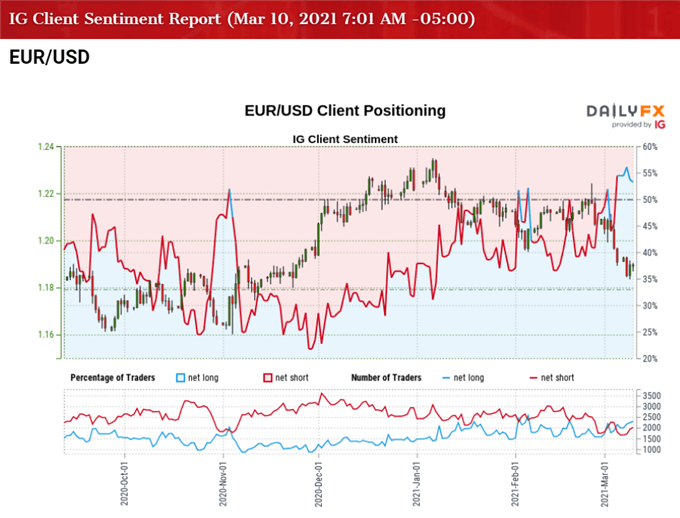 The IG Client Sentiment report shows 53.21% of traders are currently net-long EUR/USD, with the ratio of traders long to short standing at 1.14 to 1.

The number of traders net-long is 4.77% higher than yesterday and 26.74% higher from last week, while the number of traders net-short is 9.02% higher than yesterday and 4.96% lower from last week. The rise in net-long position comes as EUR/USD attempts to retrace the decline from earlier this week, while the decline in net-short interest has led to a further shift in the IG Client Sentiment index as 52.11% of traders were net-long the pair earlier this week.

With that said, a further decline in EUR/USD may fuel the recent flip in retail sentiment as it slips to a fresh yearly low (1.1836) in March, but the decline from the January high (1.2350) may turn out to be a correction in the broader trend rather than a material change in behavior as the exchange rate appears to reversing course ahead of the 200-Day SMA (1.1821).