AUD/USD fails to extend the series of lower highs and lows from the previous week as it attempts to retrace the decline following the US Non-Farm Payrolls (NFP) report, and the exchange rate may continue to defend the 2021 low (0.7564) as the US Dollar still reflects an inverse relationship with investor confidence.

AUD/USD holds above last week’s low (0.7621) to trade in a narrow range, and the broader rise in US Treasury yields appears to be influencing the exchange rate as the Reserve Bank of Australia (RBA) acknowledges that “changes in bond yields globally have been associated with volatility in some other asset prices, including foreign exchange rates.”

Nevertheless, it seems as though the RBA is on a preset course as Governor Philip Lowe and Co. reiterate that “a further $100 billion will be purchased” once the initial government bond purchase program is completed in April, and the wait-and-see approach for monetary policy may keep the Australian Dollar around “the upper end of the range of recent years” as the central bank relies on its balance sheet to achieve its policy targets.

In turn, it remains to be seen if the decline from the February high (0.8007) will turn out to be an exhaustion in the broader trend or a potential shift in AUD/USD behavior as the exchange rate struggles to hold above the 50-Day SMA (0.7730), but the recent weakness in the Australian Dollar has triggered a shift in retail sentiment as traders turned net-long the pair just ahead of March. 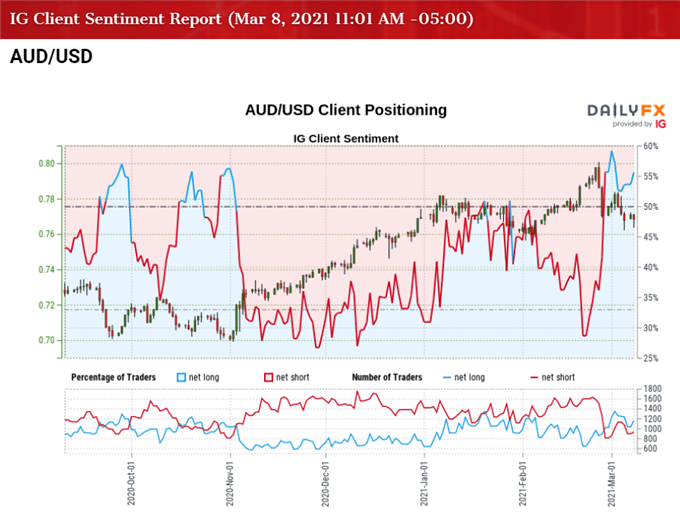 The IG Client Sentiment report shows 52.50% of traders are currently net-long AUD/USD as the ratio of traders long to short stands at 1.11 to 1.

The number of traders net-long is 15.12% higher than yesterday and 9.52% lower from last week, while the number of traders net-short is 20.38% higher than yesterday and 10.82% higher from last week. The decline in net-long interest suggests the flip in retail sentiment could be temporary as 56.92% of traders were net-long AUD/USD last week, while the rise in net-short interest comes as the exchange rate struggles to hold above the 50-Day SMA (0.7730).