USD/CAD struggles to retain the advance from the February low (1.2468) as Federal Reserve officials show little interest in adjusting the path for monetary policy, and the exchange rate may continue to pullback from the 50-Day SMA (1.2718) as it extends the series of lower highs and lows from earlier this week.

USD/CAD trades to a fresh weekly low (1.2593) ahead of the US Non-Farm Payrolls (NFP) report, and it remains to be seen if the updated figures will influence the exchange rate as Fed Governor Lael Brainard, a permanent voting member on the Federal Open Market Committee (FOMC), insists that the central bank will “not tighten monetary policy solely in response to a strong labor market.”

In a recent speech, Governor Brainard highlights that “the expected path of the U.S. economy has strengthened with the prospect of widespread vaccinations and additional fiscal stimulus,” with the official going onto say that “longer-term inflation expectations appear to have moved up in recent months, consistent with the Federal Open Market Committee's (FOMC) new commitment to achieving inflation that averages 2 percent over time.”

However, Brainard warns that “inflation is likely to temporarily rise above 2 percent on a 12-month basis when the low March and April price readings from last year fall out of our preferred 12-month PCE (personal consumption expenditure) measure,” and argues that “a burst of transitory inflation seems more probable than a durable shift above target in the inflation trend and an unmooring of inflation expectations to the upside.”

The comments suggests the FOMC is in no rush to scale back its emergency measures as Brainard insists that “asset purchases are expected to continue at least at their current pace until substantial further progress has been made toward our goals,” and it seems as though Chairman Jerome Powell and Co. will retain the current course for monetary policy at its next interest rate decision on March 17 as “the economy remains far from our goals in terms of both employment and inflation.”

Until then, key market themes may influence USD/CAD as the US Dollar still reflects an inverse relationship with investor confidence, and the advance from the February low (1.2468) may turn out to be correction in the broader trend rather than a change in behavior like the price action seen in 2020. 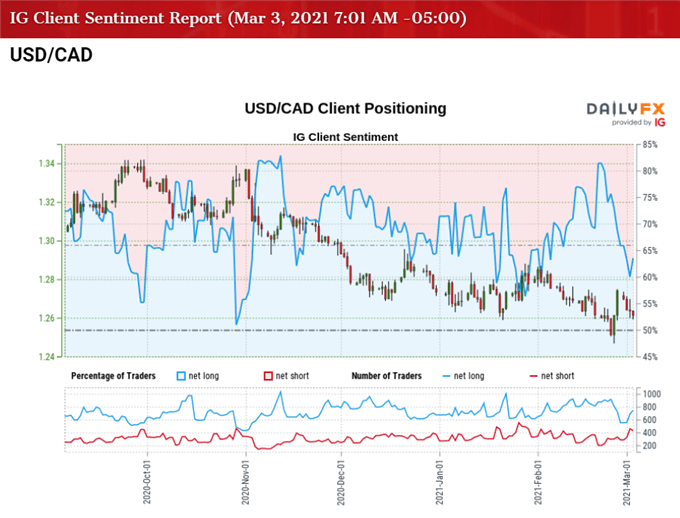 At the same time, the tilt in retail sentiment looks poised to persist as traders have been net-long USD/CAD since May 2020, with the IG Client Sentiment report showing 60.41% of traders are net-long with the ratio of traders long to short at 1.53 to 1.

The number of traders net-long is 4.11% higher than yesterday and 12.94% lower from last week, while the number of traders net-short is 15.55% higher than yesterday and 31.05% higher from last week. The decline in net-long interest comes as USD/CAD trades back below the 50-Day SMA (1.2718), while the rise in net-short position has helped to alleviate the tilt in retail sentiment as 66.14% of traders were net-long the pair during the previous week.

With that said, USD/CAD may continue to exhibit the bearish trend seen in 2020 as the Fed’s balance sheet climbs to a fresh record high, and the exchange rate may continue to pullback from the 50-Day SMA (1.2718) as it extends the series of lower highs and lows from earlier this week.