NZD/USD appears to be stuck in a narrow range after giving back the advance following the Reserve Bank of New Zealand (RBNZ) interest rate decision, and the exchange rate may continue to consolidate as the Relative Strength Index (RSI) falls back from overbought territory to indicate an exhaustion in the bullish price action.

NZD/USD struggles to retain the rebound from the weekly low (0.7209) as the US Dollar appreciates on the back of waning investor confidence, and it remains to be seen if the update to the US Non-Farm Payrolls (NFP) report will influence the exchange rate as the ADP Employment survey shows a 117K expansion in February versus projections for a 177K rise.

The NFP report may show a similar development as the previous figures showed the US economy adding 49K jobs in January versus projections for a 50K rise, and a below-forecast print for February may trigger a bearish reaction in the US Dollar as it puts pressure on the Federal Reserve to provide additional monetary support.

However, it seems as though the Federal Open Market Committee (FOMC) is in no rush to switch gears as Governor Lael Brainard insists that “the economy remains far from our goals in terms of both employment and inflation,” and key market themes may influence NZD/USD ahead of the next Fed interest rate decision on March 17 as the US Dollar continues to reflect an inverse relationship with investor confidence.

In turn, the break above the 2018 high (0.7437) suggests the broader trend remains intact for NZD/USD as the 50-Day SMA (0.7206) still tracks a positive slope, and lack of momentum to push below the moving average indicates that the pullback from the February high (0.7465) may turn out to be an exhaustion in the broader trend rather than a change in behavior as the Fed’s balance sheet climbs to a fresh record high in 2021. 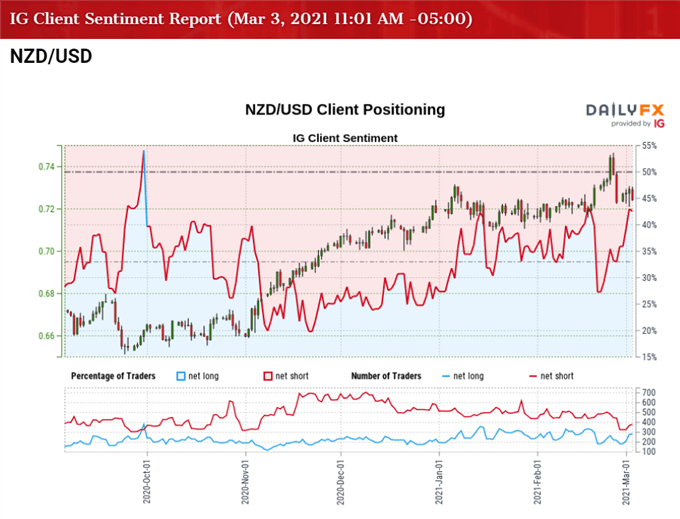 At the same time, the tilt in retail sentiment looks poised to persist as traders have been net-short NZD/USD since October, with the IG Client Sentiment report showing 42.27% of traders currently net-long the pair as the ratio of traders short to long stands at 1.37 to 1.

The number of traders net-long is 5.23% lower than yesterday and 28.32% higher from last week, while the number of traders net-short is 3.41% lower than yesterday and 15.02% lower from last week. The rise in net-long interest comes as NZD/USD holds above the 50-Day SMA (0.7206), while the decline in net-short position has helped to alleviate the tilt in retail sentiment as only 32.66% of traders were net-long the pair during the previous week.

With that said, the pullback from the February high (0.7465) may turn out to be an exhaustion in the broader trend rather than a change in NZD/USD behavior as key market themes remain in place, and the exchange rate may continue to respond to the 50-Day SMA (0.7206) like the price action seen earlier this year.