EUR/USD appears to be defending the yearly low (1.1952) even as European Central Bank (ECB) officials endorse a dovish forward guidance for monetary policy, and the exchange rate may continue to retrace the pullback from the February high (1.2243) if it snaps the series of lower highs and lows carried over from the previous week.

EUR/USD bounces back from a fresh weekly low (1.1992) as the ECB scales back the pace of the pandemic emergency purchase programme (PPEP) for the third consecutive week, and the decline from the January high (1.2350) may turn out to be a correction in the broader trend rather than a change in behavior as the Governing Council appears to be on track to retain the current course for monetary policy. 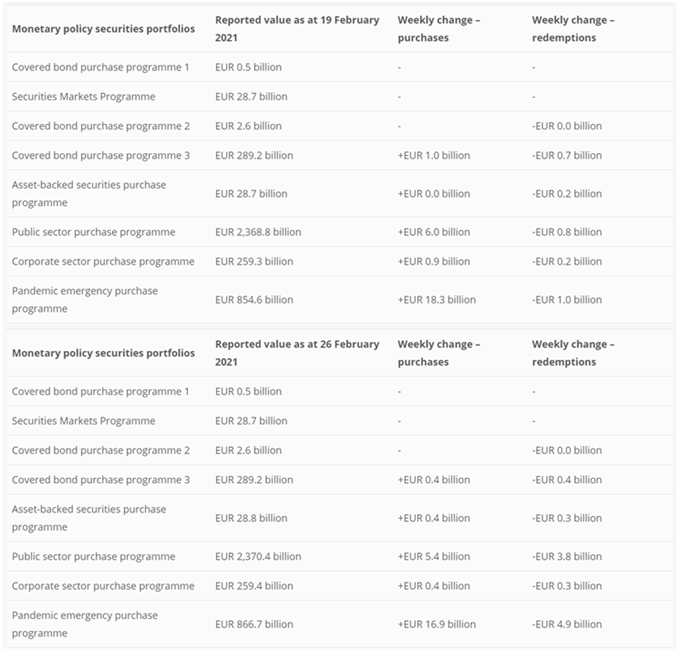 The latest figures from the ECB showed the central bank’s balance sheet increased by EUR 16.9 billion under the PPEP, which compares to the EUR 18.3 billion rise in the week ending February 19, and it seems as though the Governing Council will rely on its current tools to support the monetary union as Chief Economist Philip Lane insists that “the central bank is committed to recalibrating its underlying policy instruments if it detects any threat to the favourability of financing conditions.”

However, ECB board member Fabio Panetta warns that “the risks of providing too little policy support still far outweigh the risks of providing too much” while speaking at a virtual event hosted by the Bocconi University, with the official going onto say that “by keeping nominal yields low for longer, we can provide a strong anchor to preserve accommodative financing conditions.”

Nevertheless, Panetta acknowledges that “there is a good chance that a recovery will take hold in the latter part of this year” as European authorities prepare to distribute the Next Generation EU (NGEU) programme in 2021, and it seems as though the Governing Council is in no rush to alter the path for monetary policy even as Panetta argues that “thesteepening in the nominal GDP-weighted yield curve we have been seeing is unwelcome and must be resisted.”

As a result, the ECB may continue to endorse a wait-and-see approach at its next meeting on March 11 as President Christine Lagarde emphasizes that “our preferred tool is the pandemic emergency purchase programme (PPEP),” and EUR/USD may reflect the bullish price action seen in 2020 as the Federal Reserve stays on track to “increase our holdings of Treasury securities by at least $80 billion per month and of agency mortgage-backed securities by at least $40 billion per month.”

In turn, EUR/USD may continue to defend the yearly low (1.1952) as key market themes remain in place, but the recent weakness in the exchange rate may trigger another flip in retail sentiment as open interest falls 5.85% from the previous week. 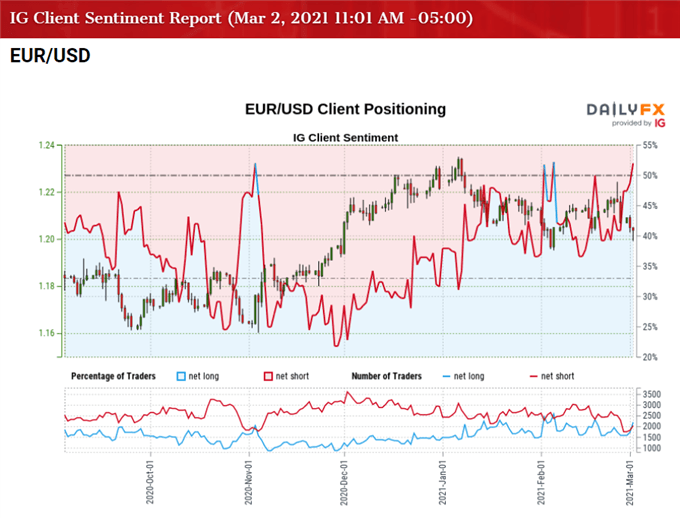 The IG Client Sentiment report shows 49.71% of traders are currently net-long EUR/USD as the ratio of traders short to long stands at 1.01 to 1, with retail sentiment on the cusp of flipping for the third time in 2021.

The number of traders net-long is 1.80% higher than yesterday and 13.26% higher from last week, while the number of traders net-short is 5.89% higher than yesterday and 19.31% lower from last week. The rise in net-long position comes as EUR/USD appears to be defending the yearly low (1.1952), while the decline in net-short interest has alleviated the crowding behavior as 40.22% of traders were net-long the pair last week.

It remains to be seen if the recent shift in the IG Client Sentiment index will be short lived like the behavior seen earlier this year, and key market themes may continue to influence EUR/USD as the US Dollar still reflects an inverse relationship with investor confidence.

With that said, the decline from the January high (1.2350) may turn out to be a correction in the broader trend rather than a change in EUR/USD behavior as the exchange rate breaks out of the descending channel from earlier this year, and the exchange rate may continue to retrace the pullback from the February high (1.2243) if it snaps the series of lower highs and lows carried over from the previous week.