AUD/USD extends the rebound from the February low (0.7692) as the Reserve Bank of Australia (RBA) keeps the official cash rate (OCR) at the record low of 0.10%, but recent developments in the Relative Strength Index (RSI) point to a further correction in the exchange rate as the oscillator falls back from overbought territory and snaps the upward trend established in February.

AUD/USD trades to a fresh weekly high (0.7814) as the RBA insists that “there are better prospects for a sustained recovery than there were a few months ago,” and the exchange rate may continue to retrace the decline from the February high (0.8007) as the central bank retains the current path for monetary policy.

It seems as though the RBA is in wait-and-see mode as “GDP is expected to return to its end-2019 level by the middle of this year,” and the central bank may continue to rely on its current tools to achieve its policy targets as Governor Philip Lowe and Co. reiterate that “a further $100 billion will be purchased” once the initial government bond purchase program is completed in April. In turn, the RBA appears to be on a preset course as “the Board remains committed to maintaining highly supportive monetary conditions until its goals are achieved,” and key market themes may keep AUD/USD afloat as the Federal Reserve’s balance sheet climbs to a fresh record high in February.

However, the rise in longer-dated US Treasury yields may sway the RBA as “this increase partly reflects a lift in expected inflation over the medium term to rates that are closer to central banks' targets,” with Governor Lowe and Co. acknowledging that “changes in bond yields globally have been associated with volatility in some other asset prices, including foreign exchange rates.”

It remains to be seen if the RBA will alter the forward guidance in 2021 as the board pledges to “not increase the cash rate until actual inflation is sustainably within the 2 to 3 per cent target range,” but the recent weakness in AUD/USD has spurred a shift in retail sentiment as the exchange rate tests the 50-Day SMA (0.7718) for the second time in 2021. 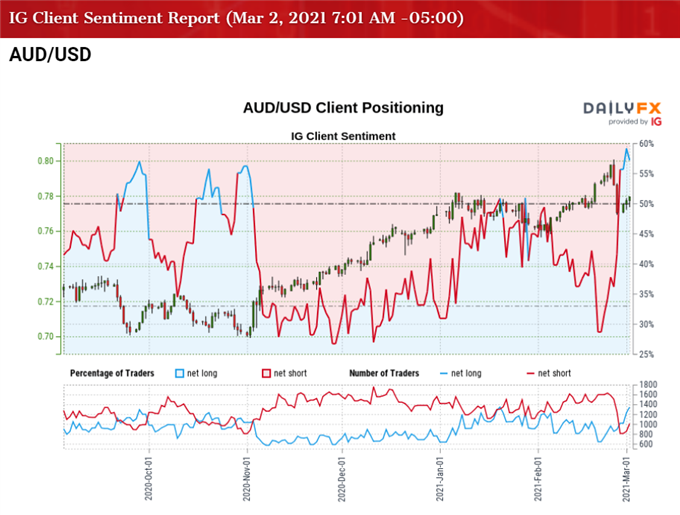 The rise in net-long position comes as AUD/USD extends the rebound off of the 50-Day SMA (0.7718), while the decline in net-short interest has fueled a shift in retail sentiment as 40.70% of traders were net-long the pair during the previous week. Nevertheless, the decline from the February high (0.8007) may end up being an exhaustion of the broader trend rather than a change in behavior as major central banks rely on their balance sheets to achieve their policy targets, and AUD/USD may continue to reflect the bullish price action seen in 2020 as key market themes remain in place.

With that said, the technical outlook for AUD/USD remains constructive as the break above January’s high (0.7820) negates the scope for a double-top formation, but recent developments in the Relative Strength Index (RSI) point to a further correction in the exchange rate as the oscillator falls back from overbought territory and snaps the upward trend established in February.