USD/CAD bounces back from a fresh yearly low (1.2468) after carving a bullish outside day (engulfing) candlestick formation, and the exchange rate appears to be on track to test the 50-Day SMA (1.2725) as the US Dollar appreciates on the back of waning investor confidence.

USD/CAD trades to a fresh weekly high (1.2685) after retracing the decline following the semi-annual testimony with Federal Reserve Chairman Jerome Powell, and the Canadian Dollar may face a larger correction during the first week of March as the rebound in the exchange rate coincides with the recent weakness in global equity prices.

Swings in risk sentiment may continue to sway USD/CAD as the US Dollar still reflects an inverse relationship with investor confidence, but the advance from the February low (1.2468) may turn out to be an exhaustion of the broader trend rather than a change in behavior like the price action seen in 2020.

It seems as though the Federal Open Market Committee (FOMC) is in no rush to alter the path for monetary policy as New York Fed President John Williams insists that “GDP growth this year could be the strongest we've seen in decades,” with the permanent voting-member on the FOMC going into say that “fiscal support, combined with highly favorable financial conditions and steady progress on vaccinations, are all reasons to be optimistic the economy will experience a strong recovery this year.”

Nevertheless, Williams emphasizes that the Fed “will continue to watch and learn and remain committed to using our full range of tools to help assure that the recovery will be as robust as possible,” and the dovish forward guidance may keep key market themes in place as the FOMC stays on track to “increase our holdings of Treasury securities by at least $80 billion per month and of agency mortgage-backed securities by at least $40 billion per month.”

In turn, the recent weakness in the Canadian Dollar may turn out to be a correction in the broader trend rather than a change in market behavior as the Fed’s balance sheet climbs to a fresh record high of $7.590 trillion in the week of February 24, but the tilt in retail sentiment persist as traders have been net-long USD/CAD since May 2020. 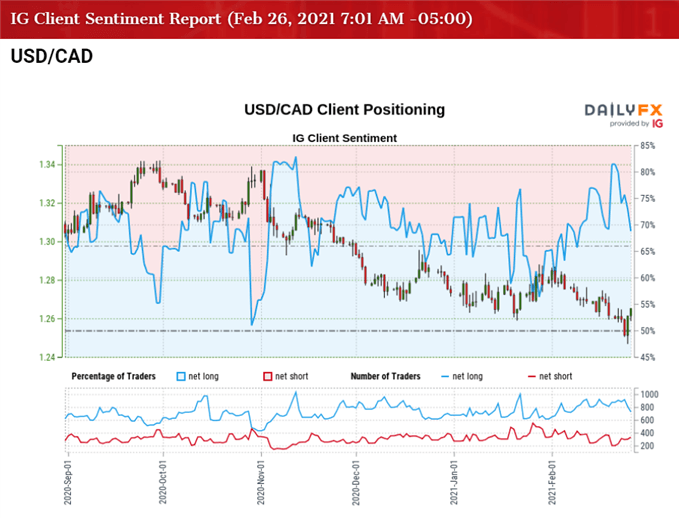 The IG Client Sentiment report shows 66.14% of traders are still net-long USD/CAD, with the ratio of traders long to short standing at 1.95 to 1.

The number of traders net-long is 13.72% lower than yesterday and 10.82% lower from last week, while the number of traders net-short is 3.09% higher than yesterday and 0.81% lower from last week. The decline in net-long position comes as USD/CAD trades to a fresh weekly high (1.2685), while the rise in net-short interest has helped to alleviate the crowding behavior as 75.24% of traders were net-long the pair earlier this week.

With that said, recent price action in USD/CAD points to a test of the 50-Day SMA (1.2724) as the exchange rate stages a rebound following a bullish outside day (engulfing) candlestick formation, but the advance from the February low (1.2468) may turn out to be an exhaustion of the broader trend rather than a change in behavior like the price action seen in 2020.