EUR/USD climbs to a fresh monthly high (1.2238) following the semi-annual testimony with Federal Reserve Chairman Jerome Powell, and the decline from the January high (1.2350) appears to have been a correction in the broader trend rather than a change in behavior as key market themes remain in place.

EUR/USD extends the advance from the start of the week on the back of US Dollar weakness, with the commodity bloc currencies trading to fresh 2021 highs against the Greenback, and the Euro may exhibit a similar behavior as the exchange rate breaks out of the descending channel from earlier this year.

It seems as though swings in risk appetite will continue to sway EUR/USD as the reserve currency still reflects an inverse relationship with investor confidence, and the exchange rate may continue to appreciate ahead of the next European Central Bank (ECB) meeting on March 11 as major central banks rely on their non-standard tools to achieve their policy targets.

A recent speech by ECB Chief Economist Philip Lane suggests the Governing Council will retain the current course for monetary policy as “the central bank is committed to recalibrating its underlying policy instruments if it detects any threat to the favourability of financing conditions,” with the board member going onto say that “we will purchase flexibly according to market conditions and with a view to preventing a tightening of financing conditions that is inconsistent with countering the downward impact of the pandemic on the projected path of inflation.”

As a result, the ECB may continue to layout a dovish forward guidance as Lane insists that the central bank “will need to continue providing ample monetary accommodation for an extended period, even after the disinflationary pressures caused by the pandemic have been sufficiently offset,” but the Governing Council appears to be in no rush to deploy more unconventional measures as President Christine Lagarde emphasizes that “our preferred tool is the pandemic emergency purchase programme (PPEP).”

In turn, EUR/USDmay continue to retrace the decline from the January high (1.2350) as the ECB adopts a wait-and-see approach after expanding the PPEP by EUR 500B at its last meeting for 2020, but the recent shift in retail sentiment looks poised to persist as the crowding behavior from the previous year resurfaces. 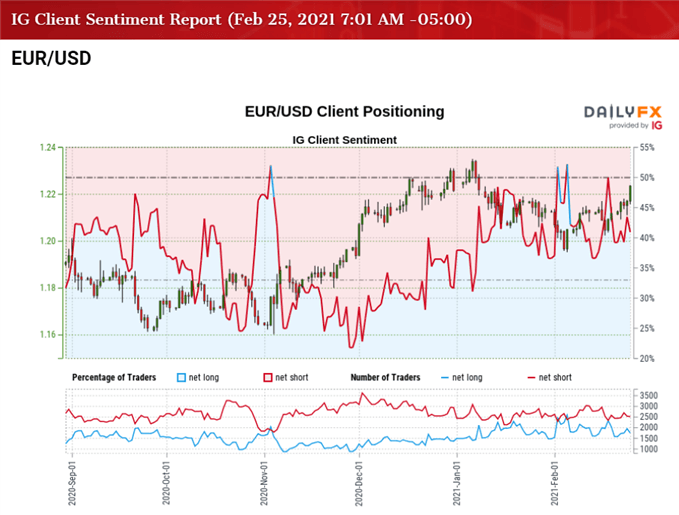 The IG Client Sentiment report shows 40.22% of traders are currently net-long EUR/USD, with the ratio of traders short to long standing at 1.49 to 1.

The number of traders net-long is 15.61% lower than yesterday and 25.04% lower from last week, while the number of traders net-short is 0.53% lower than yesterday and 8.48% higher from last week. The decline in net-long position could be a function of profit-taking behavior as EUR/USD trades to a fresh monthly high (1.2238), while the rise in net-short interest has spurred a largely tilt in retail sentiment as 47.04% of traders were net-long the pair during the previous week.

With that said, the decline from the January high (1.2350) may turn out to be a correction in the broader trend rather than a change in EUR/USD behavior as the exchange rate breaks out of the descending channel from earlier this year, and the Relative Strength Index (RSI) highlights a similar dynamic as the oscillator clears the downward trend from December.