USD/CAD struggles to retain the advance following the US Retail Sales report even though longer-dated Treasury yields hold above pre-pandemic levels, and the exchange rate may consolidate over the remainder of the week as the Federal Open Market Committee (FOMC) Minutes highlight a wait-and-see approach for monetary policy.

The transcript from the January meeting suggests the FOMC will rely on its current tools to support the US economy as “all participants supported maintaining the Committee's current settings and outcome-based guidance for the federal funds rate and the pace of asset purchases,” and it seems as though the central bank will stick to the same script at its next interest rate decision on March 17 as “the Committee's guidance for asset purchases indicated that asset purchases would continue at least at the current pace until substantial further progress toward its employment and inflation goals had been achieved.”

It remains to be seen if the FOMC will alter the forward guidance later this year as “some participants pointed to the possibility that fiscal policy could turn out to be more expansionary than anticipated,” with Chairman Jerome Powell and Co. going onto say that “participants remarked that the prospect of an effective vaccine program, the recently enacted fiscal support, and the potential for additional fiscal actions had led them to judge that the medium-term outlook had improved.”

Until then, key market themes may continue to influence USD/CAD as the US Dollar still reflects an inverse relationship with investor confidence, and the tilt in retail sentiment also looks poised to persist as traders have been net-long the pair since May 2020. 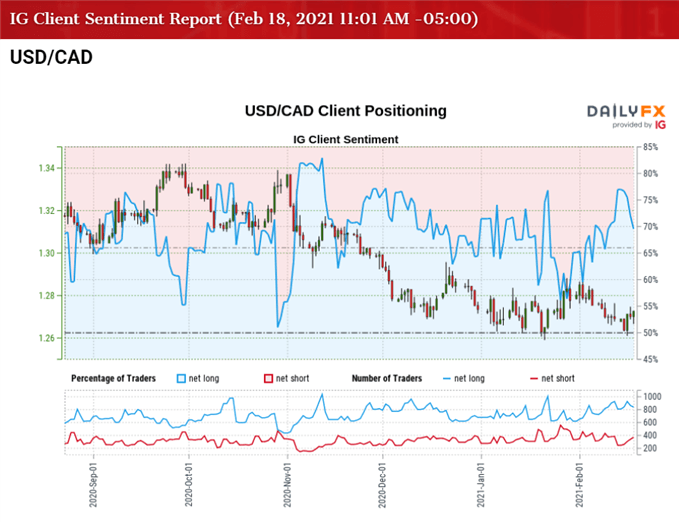 The IG Client Sentiment report shows 64.98% of traders are still net-long USD/CAD, with the ratio of traders long to short standing at 1.86 to 1.

The number of traders net-long is 4.91% lower than yesterday and 12.59% lower from last week, while the number of traders net-short is 26.12% higher than yesterday and 3.22% higher from last week. the decline in net-long position comes as USD/CAD struggles to push back above the 50-Day SMA (1.2744), while the rise in net-short interest has helped to alleviate the tilt in retail sentiment as 68.66% of traders were net-long the pair during the previous week.

With that said, the rebound from the January low (1.2589) may turn out to be a correction in the broader trend rather than a change in USD/CAD behavior as key market themes remain in place, with the Relative Strength Index (RSI) indicating a similar dynamic as the oscillator snaps the upward trend from earlier this year.