NZD/USD appears to tracking the weakness in equity prices as the S&P 500 pulls back from the session high (3950), and swings in risk appetite may continue to sway the exchange rate as the US Dollar still reflects an inverse relationship with investor confidence.

NZD/USD climbed to fresh monthly highs after breaking out of the descending channel formation from earlier this year, but the exchange rate seems to have reversed course ahead of the January high (0.7315) as the US Dollar appreciates against its major counterparts.

In turn, NZD/USD may consolidate ahead of the next Reserve Bank of New Zealand (RBNZ) meeting on February 24 as the country currently faces a three-day lockdown, and the threat of a protracted recovery may encourage Governor Adrian Orr and Co. to further support the economy as the central bank is “prepared to lower the OCR (official cash rate) to provide additional stimulus if required.” 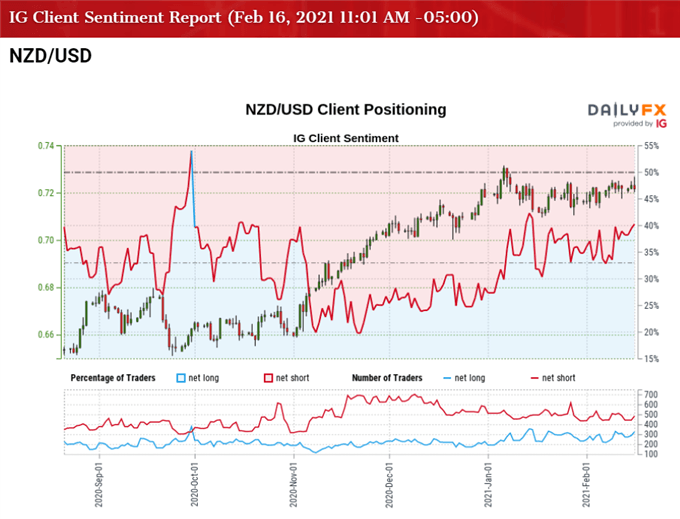 The IG Client Sentiment report shows 39.68% of traders are currently net-long NZD/USD as the ratio of traders short to long stands at 1.52 to 1.

With that said, the decline from the January high (0.7315) may turn out to be an exhaustion in the broader trend rather than a change in market behavior as NZD/USD largely preserves the advance off of the 50-Day SMA (0.7161), and key market themes may keep the exchange rate afloat as the