AUD/USD trades to fresh monthly highs after breaking out of the opening range for February, with recent developments in the Relative Strength Index (RSI) indicating a further appreciation in the exchange rate as it clears the downward trend established earlier this year.

AUD/USD carves a bullish price sequence (higher highs and lows) following the failed attempt to test the monthly low (0.7564), and the pullback from the January high (0.7820) may turn out to be an exhaustion in the broader trend rather than a change in market behavior as the Reserve Bank of Australia (RBA) appears to be in no rush to switch gears.

It seems as though the RBA is on a preset course as the central bank plans to “purchase an additional $100 billion of bonds issued by the Australian Government and states and territories when the current bond purchase program is completed in midApril,” and the board may stick to the same script at the next meeting on March 2 as Governor Philip Lowe tells lawmakers that “the downturn in Australia was not as deep as we had feared and the recovery started earlier and has been stronger than we were expecting.”

Governor Lowe went onto say that “if we were to cease bond purchases in April, it is likely that there would be unwelcome upward pressure on the exchange rate,” with the central bank head emphasizing that “the Board has no appetite to go into negative territory and has done as much as it reasonably can with interest rates”while testifying in front of the House of Representatives Standing Committee on Economics.

In turn, swings in risk appetite may continue to sway AUD/USD as key market themes remain in place, and it remains to be seen if the recent shift in retail positioning will highlight a similar dynamic as the crowding behavior from 2020 resurfaces. 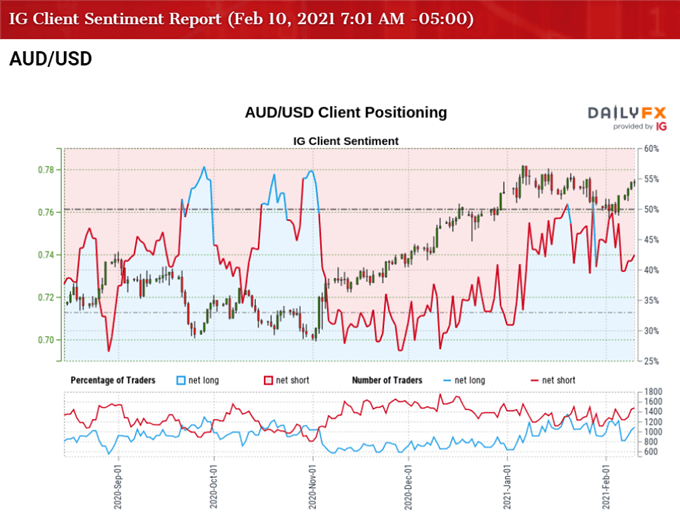 The IG Client Sentiment report shows 40.09% of traders are currently net-long AUD/USD as the ratio of traders short to long stands at 1.49 to 1.

The number of traders net-long is 2.37% lower than yesterday and 10.80% lower from last week, while the number of traders net-short is 2.39% higher than yesterday and 2.46% higher from last week. The decline in net-long position could be a function of profit-taking behavior as AUD/USD breaks out of the opening range for February, while the rise in net-short interest has fueled the crowding behavior as 49.41% of traders were net-long the pair during the previous week.

With that said, the growing tilt in retail sentiment may continue to accompany the rebound in AUD/USD like the behavior seen in 2020, and the pullback from the January high (0.7820) may turn out to be an exhaustion in the bullish price action rather than a change in trend as the US Dollar still reflects an inverse relationship with investor confidence.