EUR/USD appears to have marked another failed attempt to test the January low (1.2054) as it bounces back from the session low (1.2070), but the exchange rate may face a larger pullback as the Relative Strength Index (RSI) still tracks the downward trend carried over from December.

EUR/USD continues to consolidate following the Federal Reserve’s first meeting for 2021 to retain the monthly range, and key market themes may keep the exchange rate afloat as the US Dollar still broadly reflect an inverse relationship with investor confidence.

However, fresh data prints coming out of the Euro Area may drag on EUR/USD as the update to the Gross Domestic Product (GDP) report is anticipated to show the economy contracting 1.0% in the fourth quarter of 2020, and it remains to be seen if the European Central Bank (ECB) will take additional steps to support the monetary union as Governing Council acknowledges that “the risks surrounding the euro area growth outlook remain tilted to the downside but less pronounced.”

It seems as though the ECB will rely on its current tools to achieve its policy targets after announcing plans to carry out the EUR 1.850 trillion pandemic emergency purchase programme (PEPP) “until at least the end of March 2022 and, in any case, until the Governing Council judges that the coronavirus crisis phase is over,” and the central bank may stick to the sidelines at the next meeting on March 11 as Chief Economist Philip Lane emphasizes that “our active toolbox is a combination of our short term rates, asset purchases, targeted lending and our forward guidance” during a recent interview with Süddeutsche Zeitung.

The comments suggest the ECB will retain the current course for monetary policy especially as fiscal authorities plan to roll out the Next Generation EU package in 2021, and key market themes may continue to sway EUR/USD as President Christine Lagarde and Co. appear to be in no rush to switch gears. 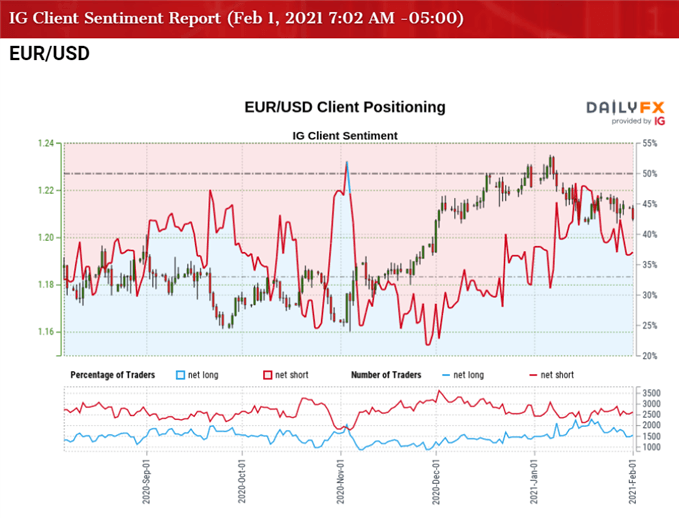 At the same time, the tilt in retail sentiment looks poised to persist as traders have been net-short EUR/USD since November, with the IG Client Sentiment report showing 44.74% of traders currently net-long the pair as the ratio of traders short to long stands at 1.24 to 1.

The number of traders net-long is 36.05% higher than yesterday and 5.25% higher from last week, while the number of traders net-short is 3.20% lower than yesterday and 12.80% lower from last week. The decline in net-long position comes as EUR/USD appears to have marked another failed attempt to test the January low (1.2054), while the decline in net-short interest has helped to alleviate the crowding behavior as 41.60% of traders were net-long the pair during the previous week.

With that said, the decline from the January high (1.2350) may turn out to be a correction in the broader trend rather than a change in EUR/USD behavior as key market themes remain in place, but the exchange rate remains susceptible to a larger pullback as long as the Relative Strength Index (RSI) tracks the downward trend established in December.