USD/CAD extends the advance from the January low (1.2590) as the Federal Reserve’s first interest rate decision for 2021 fails to bolster investor confidence, and the exchange rate may stage a larger correction over the remainder of the month as the Relative Strength Index (RSI) continues to diverge with price and tracks the upward established earlier this year.

USD/CAD trades to a fresh monthly high (1.2881) as the Federal Open Market Committee (FOMC) insists that “fiscal policy will help households and businesses weather the downturn as well as limit lasting damage to the economy that could otherwise impede the recovery,” and it seems as though the central bank is in no rush to deploy more unconventional tools even though “the pace of the recovery has moderated in recent months.”

The FOMC appears to be on track to retain the current course for monetary policy as the committee argues that “the recently enacted Coronavirus Response and Relief Act will provide additional support,” and it remains to be seen if Chairman Jerome Powell and Co. will adjust the forward guidance over the coming months as the central bank remains “committed to using our full range of tools to support the economy.”

In turn, a further deterioration in risk appetite may keep USD/CAD afloat as the US Dollar still reflects an inverse relationship with investor confidence, but the tilt in retail sentiment looks poised to persist following the FOMC rate decision as traders have been net-long the pair since May 2020. 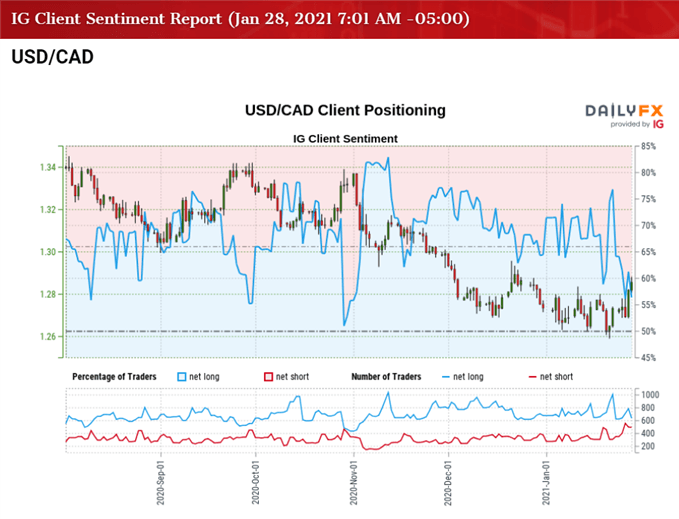 The decline in net-long position comes as USD/CAD trades to a fresh monthly high (1.2881), while the surge in net-short interest has helped to alleviate the tilt in retail sentiment as 58.66% of traders were net-long the pair earlier this week.

With that said, USD/CAD may stage a larger correction over the remainder of the month as the FOMC rate decision fails to bolster investor confidence, and the Relative Strength Index (RSI) may continue to diverge with price as it tracks the upward trend established earlier this year.