AUD/USD snaps the monthly opening range for January following the Federal Reserve’s first interest rate decision for 2021, and the Relative Strength Index (RSI) indicates a larger correction in the exchange rate as it continues to track the downward trend established earlier this year.

AUD/USD bounces back from a fresh monthly low (0.7592) as the update to the US Gross Domestic Product (GDP) report appears to be dragging on the US Dollar, and the figures may put pressure on the Federal Open Market Committee (FOMC) to further support the US economy as the central bank acknowledges that “the pace of the recovery has moderated in recent months.”

However, the US dollar may will continue to pare the bullish reaction to the FOMC rate decision as the committee stays on track to “increase our holdings of Treasury securities by at least $80 billion per month and of agency mortgage-backed securities by at least $40 billion per month,” and it seems as though Chairman Jerome Powell and Co. are in no rush to deploy more unconventional measures as “fiscal policy will help households and businesses weather the downturn as well as limit lasting damage to the economy that could otherwise impede the recovery.”

In turn, AUD/USD may face a larger correction ahead of the Reserve Bank of Australia (RBA) meeting on February 2 as the Fed’s decision to retain the current course for monetary policy appears to be dragging on investor confidence, with the recent decline in the exchange rate spurring a shift in retail sentiment as traders flip net-long the pair for the second time in January. 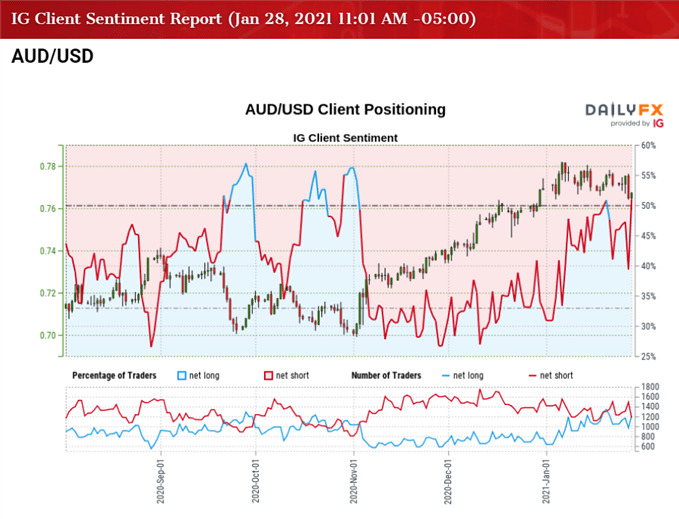 The decline in net-short interest comes as AUD/USD snaps the opening range for January, while the rise in net-long interest could be indicative of a looming shift in market behavior as the FOMC relies on its current tools to support the US economy.

With that said, it remains to be seen if the pullback from the monthly high (0.7820) will turn out to be an exhaustion in the bullish trend rather than a change in AUD/USD behavior like the price action seen in the second half of 2020, but failure to retain the opening range for January may lead to a larger correction as the Relative Strength Index (RSI) continues to track the downward trend established earlier this year.