USD/CAD remains under pressure following the Bank of Canada’s (BoC) first meeting for 2021, and the Relative Strength Index (RSI) warns of a further decline in the exchange rate as the oscillator threatens the upward trend established earlier this month.

USD/CAD trades to a fresh monthly low (1.2589) even though the BoC projects the “economy to shrink by roughly 2½ percent in the first quarter of 2021” as the central bank appears to be on track to shift gears later this year.

There appears to be a growing discussion at the BoC to scale back the emergency measures as “the Governing Council gains confidence in the strength of the recovery,” with Governor Tiff Macklem and Co. going onto say that “the pace of net purchases of Government of Canada bonds will be adjusted as required” as the central bank expects a strong recovery in the second quarter of 2021.

At the same time, Governor Macklem emphasized that “it is too early to consider slowing the pace of our purchases of Government of Canada bonds” as Canada Employment contracts for the first time in eight months, but it seems as though the BoC will gradually alter the forward guidance over the coming months as the “extraordinary fiscal and monetary policies have been working as intended.”

In turn, the looming shift in the BoC’s policy may keep USD/CAD under pressure ahead of the next meeting on March 10 as Governor Macklem and Co. acknowledge that “a broad-based decline in the US exchange rate combined with stronger commodity prices have led to a further appreciation of the Canadian dollar.” 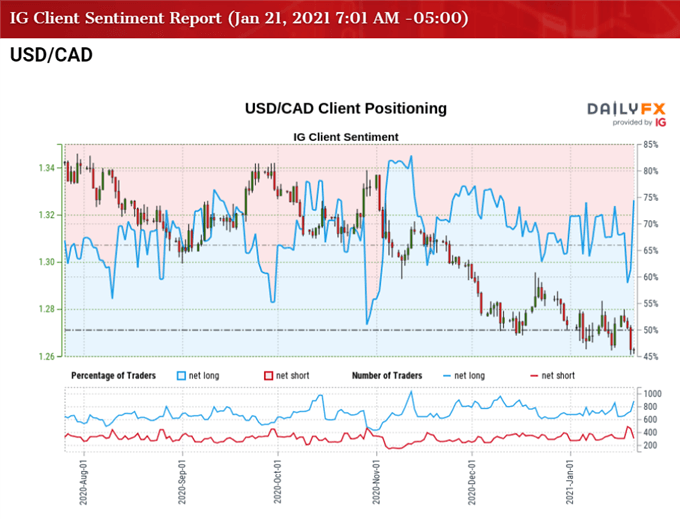 Meanwhile, the tilt in retail sentiment looks poised to persist as traders have been net-long USD/CAD since May 2020, with the IG Client Sentiment report showing 76.03% of traders currently net-long the pair as the ratio of traders long to short stands at 3.17 to 1.

The number of traders net-long is 31.99% higher than yesterday and 28.81% higher from last week, while the number of traders net-short is 36.13% lower than yesterday and 15.79% lower from last week. The recent adjustment in retail position has fueled a further tilt in retail sentiment as 68.14% of traders were net-long USD/CAD last week, and the crowding behavior looks poised to persist even though the exchange rate trades to a fresh monthly-low (1.2606).

With that said, key market themes may continue to sway USD/CAD as the US Dollar still reflects an inverse relationship with investor confidence, and the exchange rate may remain under pressure following the BoC rate decision as the Relative Strength Index (RSI) threatens the upward trend established earlier this month.