EUR/USD approaches the April 2018 high (1.2414) as it breaks out of the range bound price action from earlier this week, and the Federal Open Market Committee (FOMC) Minutes may do little to derail the appreciation in the exchange rate as the central bank relies on its non-standard tools to support the US economy.

EUR/USD trades to a fresh weekly high (1.2350) despite the limited reaction to the ADP Employment report, which showed the US economy unexpectedly shedding 123K jobs in December, and it remains to be seen if the FOMC Minutes will sway the exchange rate as the central bank appears to be in no rush to further support the US economy.

It seems as though the FOMC will endorse an outcome based approach in 2021 as the central bank plans to “achieve inflation moderately above 2 percent for some time so that inflation averages 2 percent over time,” but the transcript from the December meeting may keep key market trends in place as the Chairman Jerome Powell and Co. remain on track to “increase our holdings of Treasury securities by at least $80 billion per month and of agency mortgage backed securities by at least $40 billion per month.”

In turn, swings in risk appetite may continue to influence EUR/USD as the US Dollar still reflects an inverse relationship with investor confidence, and the tilt in retail sentiment also looks poised to persist as retail traders have been net-short the pair since November. 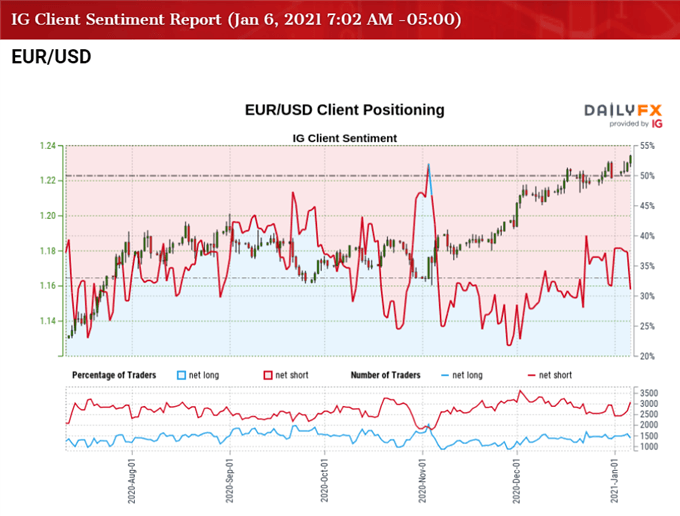 The decline in net-long position could be a function of profit taking behavior as EUR/USD trades to a fresh weekly high (1.2350), but the rise in net-short interest suggests the tilt in retail sentiment is likely to persist as 32.71% of traders were net-long the pair in mid-December.

With that said, the consolidation from the September high (1.2011) proved to be an exhaustion in the EUR/USD rally rather than a change in trend as the crowding behavior from earlier this resurfaces, and key market themes may keep the exchange rate afloat as the Fed’s balance sheet sits near the record high.

However, the Relative Strength Index (RSI) has diverged with price as the oscillator established a downward trend in December, and the indicator may warn of a near-term pullback in EUR/USD if it continues to hold below overbought territory.