AUD/USD extends the advance from earlier this week as the US Dollar deprecates on the back of improving risk appetite, and the Relative Strength Index (RSI) indicates a further appreciation in the exchange rate as the oscillator holds in overbought territory.

AUD/USD clears the April 2018 high (0.7813) as it extends the series of higher highs and lows from the start of the week, and the key market trends may keep the exchange rate afloat as the US Dollar still shows an inverse relationship with investor confidence.

In turn, AUD/USD may continue to exhibit a bullish behavior as the Federal Reserve’s balance sheet sits near the record high, and the exchange rate may approach the March 2018 high (0.7916) ahead of the next Reserve Bank of Australia (RBA) meeting on February 1 as Governor Philip Lowe and Co. acknowledge that “the improvement in risk sentiment has also been associated with a depreciation of the US dollar and an appreciation of the Australian dollar.”

Looking ahead, it seems as though the RBA will stick to the sidelines after announcing plans to purchase “$100 billion of government bonds of maturities of around 5 to 10 years over the next six months” in November, and the central bank may rely on its current tools to achieve its policy targets as the board pledges to “keep the size of the bond purchase program under review, particularly in light of the evolving outlook for jobs and inflation.” 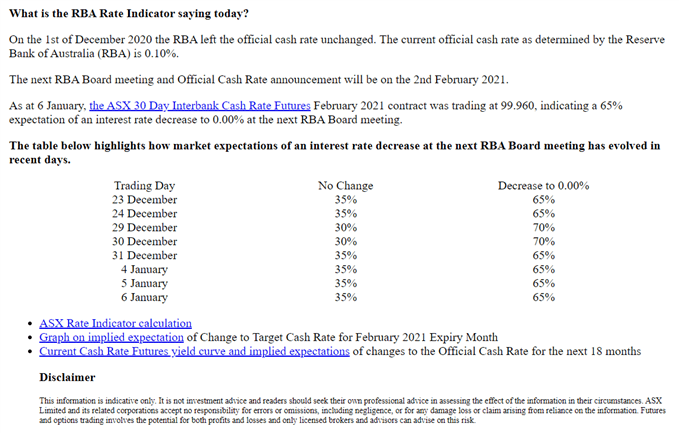 However, the ASX 30 Day Interbank Cash Rate Futures February 2021 contract shows “a 65% expectation of an interest rate decrease to 0.00% at the next RBA Board meeting,” and it remains to be seen if Governor Lowe and Co. will deploy more unconventional measures in 2021 as “the Board is prepared to do more if necessary.”

Until then, swings in risk sentiment may continue to sway AUD/USD, and the tilt in retail sentiment also looks poised to persist as retail traders have been net-short the pair since November. 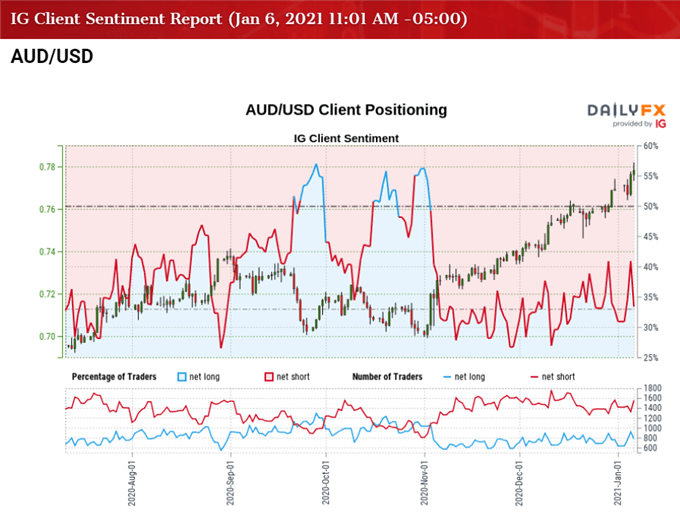 The rise in net-long position comes as AUD/USD clears the April 2018 high (0.7813), while the decline in net-short interest has helped to alleviate the crowding behavior as only 30.73% of traders were net-long the pair in mid-December.

With that said, key market trends may keep AUD/USD afloat as the US Dollar still shows an inverse relationship with investor confidence, and the exchange rate may approach the March 2018 high (0.7916) as long as the Relative Strength Index (RSI)holds in overbought territory.