EUR/USD appears to be stuck in a narrow range ahead of the European Central Bank’s (ECB) last meeting for 2020, but the technical outlook remains constructive as the Relative Strength Index (RSI) continues to track the upward trend established in November and holds in overbought territory.

EUR/USD may consolidate ahead of the ECB interest rate decision on December 10 as “members widely agreed that, given the sharper slowdown in growth momentum and the weakening of underlying inflation dynamics compared with what had previously been expected, as well as the deterioration in the balance of risks, it would be warranted to recalibrate the monetary policy instruments in December.”

The account of the October meeting revealed that “there was wide agreement on the need to signal the necessity of recalibrating the ECB’s monetary policy instruments at the December monetary policy meeting,” with officials going onto say that the Governing Council “stood ready to act with all the flexibility that was embodied in its pandemic emergency monetary policy tools, while also stressing its determination to act and signalling its willingness to adjust all instruments, if needed.”

It remains to be seen if the ECB will take additional steps to support the Euro Area as President Christine Lagarde and Co. insist that “the Governing Council should not pre-commit itself to specific policy actions,” and it seems as though the central bank is in no rush to deploy more unconventional measures as “the existing monetary policy instruments were viewed as effective.”

In turn, the ECB may recalibrate its current tools ahead of 2021 as the central bank relies on its balance sheet to combat the economic shock from COVID-19, and key market trends may carry into the year ahead as the US Dollar continues to reflect an inverse relationship with investor confidence. 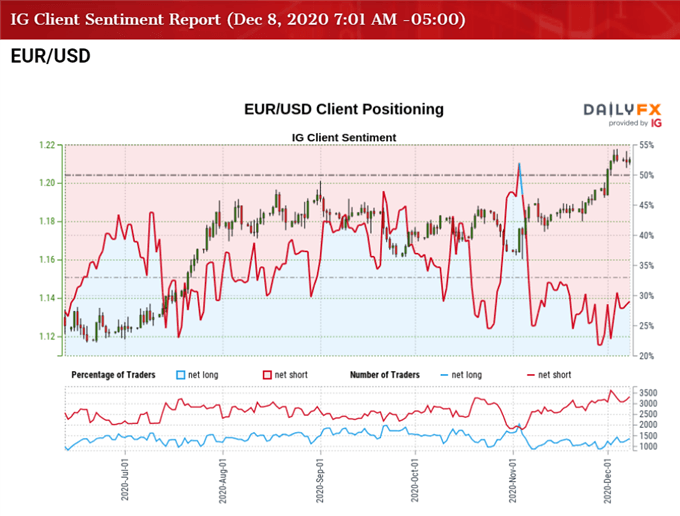 At the same time, the tilt in retail sentiment looks poised to persist as the crowding behavior from earlier this year resurfaces, with the IG Client Sentiment report showing 30.60% of traders are net-long EUR/USD as the ratio of traders short to long stands at 2.27 to 1.

The number of traders net-long is 13.26% higher than yesterday and 19.67% higher from last week, while the number of traders net-short is 2.81% higher than yesterday and 1.02% lower from last week. The rise in net-long position comes as EUR/USD trades in a narrow range ahead of the ECB meeting, but the minor adjustment in short-interest has done little to alleviate the tilt in retail sentiment as 30.53% of traders were net-long the pair at the next of last week.

With that said, the consolidation from the September high (1.2011) appears to have been an exhaustion in the bullish price action rather than a change in trendas the crowding behavior in EUR/USD resurfaces, and the technical outlook remains constructive as the Relative Strength Index (RSI) continues to track the upward trend established in November and sits in overbought territory.