USD/CAD attempts to retrace the decline following Canada’s Employment report, but the Bank of Canada (BoC) interest rate decision may keep the exchange rate under pressure as the central bank scales back its emergency measures ahead of 2021.

USD/CAD bounces back from a fresh monthly yearly low (1.2770) ahead of the BoC’s last meeting for 2020 as the US Dollar appreciates on the back of waning investor confidence, but the exchange rate may extend the series of lower highs and lows from the start of the month as the Relative Strength Index (RSI) tracks the downward trend from November and sits in oversold territory for the first time since June.

Looking ahead, the BoC is expected to keep the benchmark interest rate at the record low of 0.25% on December 9 as the central bank adjusts its quantitative easing (QE) program, with Governor Tiff Macklem and Co. announcing that “total purchases will be gradually reduced to at least $4 billion a week” as the board plans to shift its QE program towards longer-term bonds.

In turn, the BoC may largely endorse a wait-and-see approach going into 2021 as the central bank insists that the “QE program will continue until the recovery is well underway,” and key market trends may continue to influence USD/CAD as the Federal Reserve vows to “increase its holdings of Treasury securities and agency mortgage-backed securities at least at the current pace.” 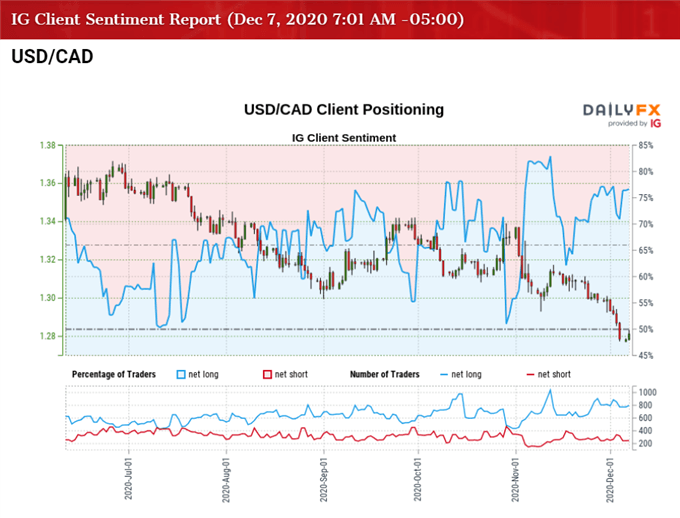 At the same time, the tilt in retail sentiment also looks poised to persist as traders have been net-long USD/CAD since mid-May, with the IG Client Sentiment report showing 77.80% of traders still net-long the pair as the ratio of traders long to short stands at 3.50 to 1.

The number of traders net-long is 13.15% higher than yesterday and 8.22% higher from last week, while the number of traders net-short is 4.20% higher than yesterday and 21.02% lower from last week. The decline in net-short position could be a function of profit-taking behavior as USD/CAD bounces back from a fresh monthly yearly low (1.2770), but the rise in net-long interest has spurred a further tilt in retail sentiment as 72.49% of traders were net-long the pair during the previous week.

With that said, key market trends may keep USD/CAD under pressure as the US Dollar continues to reflect an inverse relationship with investor confidence, and the exchange rate may extend the series of lower highs and lows from the previous week as the Relative Strength Index (RSI) tracks the downward trend from November and sits in oversold territory for the first time since June.