EUR/USD retains the series of higher highs and lows from earlier this week despite the kneejerk reaction to the US Non-Farm Payrolls (NFP) report, and recent developments in the Relative Strength Index (RSI) indicate the bullish momentum may gather pace as the oscillator sits in oversold territory for the first time since August.

The EUR/USD rally appears to be unfazed by the NFP report as the US economy adds 245K jobs in November versus forecasts for a 469K expansion, but signs of a slowing recovery may put pressure on the Federal Reserve to provide additional monetary support as Chairman Jerome Powell tells US lawmakers that the Federal Open Market Committee (FOMC) remains “committed to using our full range of tools to support the economy and to help assure that the recovery from this difficult period will be as robust as possible.”

As a result, the Fed may continue to endorse a dovish forward guidance at its last meeting for 2020 as Chairman Powell and Co. “assess how our ongoing asset purchases can best support our maximum employment and price-stability objectives as well as market functioning and financial stability,” and it remains to be seen if the central bank will talk up speculation for additional monetary support on December 16 as Dallas Fed President Robert Kaplan, a 2020-voting member on the FOMC, warns that the economic recovery could “stall out either by the end of this year or into the first quarter.”

Until then, key market trends may influence EUR/USD as the European Central Bank (ECB) appears to be on track to retain its current policy at its next meeting on December 10, and swings in risk appetite may sway the exchange rate as the US Dollar continues to reflect an inverse relationship with investor confidence. 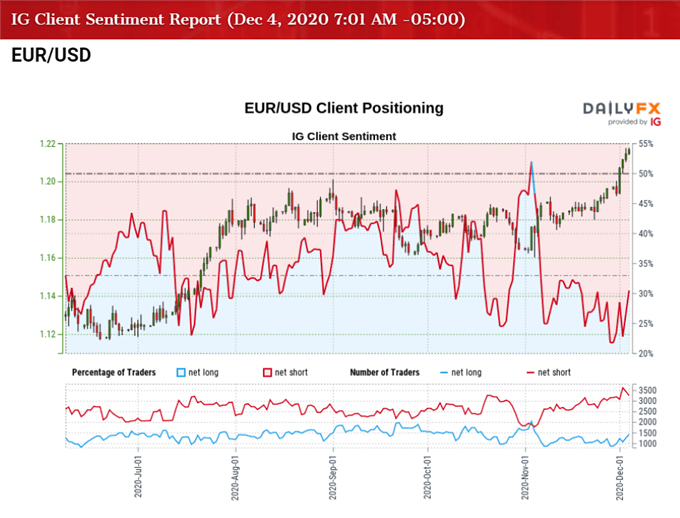 At the same time, the tilt in retail sentiment looks poised to persist as the crowding behavior from earlier this year resurfaces, with the IG Client Sentiment report showing 30.53% of traders currently net-long EUR/USD as the ratio of traders short to long stands at 2.28 to 1.

The number of traders net-long is 8.89% higher than yesterday and 22.54% higher from last week, while the number of traders net-short is 3.76% lower than yesterday and 3.34% higher from last week. The rise in net-long interest has helped to alleviate the tilt in retail sentiment as only 27.37% of traders were net-long EUR/USD last week, but the rise in net-short position suggests the crowding behavior will persist throughout the remainder of the year even though the exchange rate trades to fresh yearly highs in December.

With that said, the consolidation from the yearly high (1.2011) appears to have been an exhaustion in the bullish price action rather than a change in trendas the crowding behavior in EUR/USD resurfaces, and recent developments in the Relative Strength Index (RSI) indicate the bullish momentum may gather pace as the oscillator sits in oversold territory for the first time since August.