USD/CAD takes out the November low (1.2923) despite the limited reaction to Canada’s Gross Domestic Product (GDP) report, and key market trends may keep the exchange rate under pressure as the US Dollar continues to reflect an inverse relationship with investor confidence.

USD/CAD tags a fresh yearly low (1.2916) even though Canada’s GDP report fell short of market expectations, with the growth rate expanding 40.5% in the third quarter of 2020 versus projections for a 47.6% print.

It remains to be seen if the update to Canada’s Employment report will influence the near-term outlook for USD/CAD as the economy is expected to add another 20.0K jobs in November, but the fresh data prints may do little to sway the monetary policy outlook as the Bank of Canada (BoC) scales back its emergency measures ahead of 2021.

It seems as though the BoC will largely endorse a wait-and-see approach at its last meeting for 2020 as Governor Tiff Macklem emphasizes that “the focus of our bond purchases has shifted squarely to providing the monetary stimulus required to support the recovery,” and the central bank may merely attempt to buy time on December 9 as the board insists that the “QE program will continue until the recovery is well underway.”

In turn, swings in risk appetite may influence USD/CAD ahead of Canada’s Employment report as the US Dollar continues to reflect an inverse relationship with investor confidence, and it looks as though the tilt in retail sentiment will also persist throughout the remainder of the year as traders have been net-long the pair since mid-May. 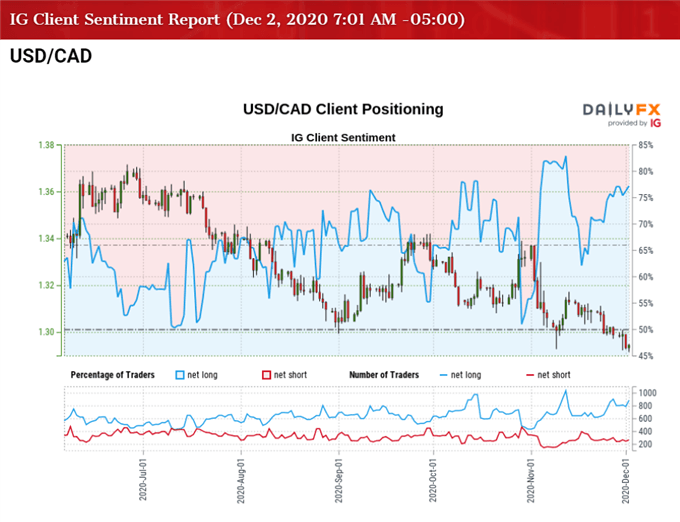 The rise in net-short position comes as USD/CAD takes out the November low (1.2923), while the rise in net-long interest has spurred a further tilt in retail sentiment as 71.89% of traders were net-long the pair at the start of the week.

With that said, key market trends may keep USD/CAD under pressure as the tilt in retail sentiment persists, with the Relative Strength Index (RSI) exhibiting a similar dynamic as it continues to track the downward trend established in November.