The price of gold bounces back from the November low ($1765) to snap the series of lower highs and lows carried over from late last week, and the precious metal may stage a larger rebound over the coming days as the Relative Strength Index (RSI) bounces back from oversold territory to reflect a textbook buy signal.

The price of goldappears to have reversed course ahead of the July low ($1758) even as the Organisation for Economic Co-operation and Development (OECD) see “global GDP at pre-pandemic levels by the end of 2021,” and the precious metal may continue to move to the beat of its own drum as the correction from the record high ($2075) appears to be a shift in market behavior rather than an exhaustion in the bullish trend. 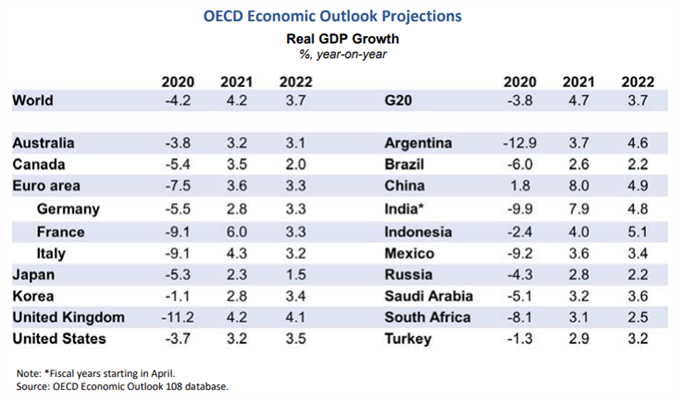 The fresh projections from the OECD show global GDP rising “by around 4¼ per cent in 2021 and a further 3¾ per cent in 2022,” but the group goes onto say that “the recovery will be uneven across countries, potentially leading to lasting changes in the world economy” amid the ongoing restrictions due to the COVID-19 pandemic.

In turn, major central banks may come under pressure to provide additional monetary support amid the threat of a protracted recovery, and the Federal Reserve may continue to endorse a dovish forward guidance at its next interest rate decision on December 16 as Chairman Jerome Powell tells US lawmakers that the Federal Open Market Committee (FOMC) remains “committed to using our full range of tools to support the economy and to help assure that the recovery from this difficult period will be as robust as possible.”

It remains to be seen if the FOMC will deploy more non-standard measures in 2021 as Treasury Secretary Steven Mnuchinwinds down the emergency lending facilities, but it seems as though the central bank will rely on its current tools to support the US economy as the committee vows to “increase its holdings of Treasury securities and agency mortgage-backed securities at least at the current pace.”

Looking ahead, key market trends may carry into the year ahead even though the Fed’s balance sheet pulls back from the record high ($7.243 trillion) to $7.217 trillion in the week of November 25 as Chairman Powell and Co. “assess how our ongoing asset purchases can best support our maximum employment and price-stability objectives as well as market functioning and financial stability.”

At the same time, the tilt in retail sentiment looks poised to persist as the net-long US Dollar bias from earlier this year resurfaces, with the IG Client Sentiment report showing traders net-long USD/CHF, USD/CAD and USD/CHF, while the crowd is net-short GBP/USD, AUD/USD, EUR/USD and NZD/USD.

However, fresh market trends appear to be taking shape ahead of 2021 as the price of gold no longer traders to fresh yearly highs during every single month in 2020, and the correction from the record high ($2075) now appears to be a shift in market behavior rather than an exhaustion in the bullish price action as the precious metal trades at its lowest level since July.

With that said, the price of gold may continue to move to the beat of its own drum even though the US Dollar continues to show an inverse relationship with investor confidence, and bullion may stage a larger rebound over the coming days as it appears to be reversing course ahead of the July low ($1758), while the Relative Strength Index (RSI) bounces back from oversold territory to reflect a textbook buy signal.