AUD/USD consolidates ahead of Australia’s Gross Domestic Product (GDP) report as the data is expected to confirm the first recession in nearly 30 years, but key market trends may keep the exchange rate afloat throughout the remainder of the year as the Reserve Bank of Australia (RBA) moves to the sidelines as its last meeting for 2020.

AUD/USD lags behind is New Zealand counterpart as NZD/USD trades to fresh yearly highs in November, and the Australian Dollar may trade within a defined range over the coming days as Australia’s GDP report is anticipated to show the growth rate contracting 4.4% in the third quarter of 2020 following the 6.3% decline during the previous period.

It remains to be seen if the data print will influence the monetary policy outlook as the RBA remains “prepared to do more if necessary,” and the central bank may continue to endorse a dovish forward guidance in 2021 as the “recovery is still expected to be uneven and drawn out.”

However, the RBA may carry out a wait-and-see approach after laying out plans to purchase “$100 billion of government bonds of maturities of around 5 to 10 years over the next six months,” and key market trends look persist throughout the remainder of the year as Governor Philip Lowe and Co. acknowledge that “theimprovement in risk sentiment has also been associated with a depreciation of the US dollar and an appreciation ofthe Australian dollar.”

In turn, swings in risk appetite may continue to sway AUD/USD ahead of the last Federal Reserve interest rate decision on December 16, and the tilt in retail sentiment also looks poised to persist as the crowding behavior from earlier this year reappears. 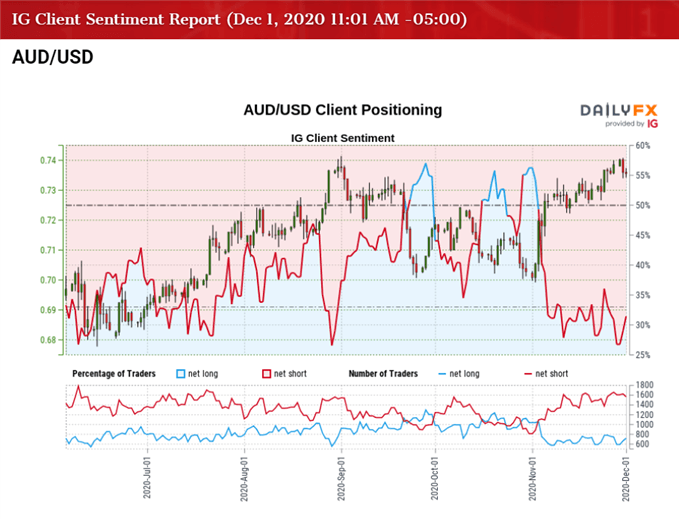 The rise in net-short position comes as AUD/USD struggles to test the yearly high (0.7414), while the rise in net-long interest has done little to alleviate the tilt in retail sentiment as 33.82% of traders were net-long the pair last week.

With that said, the correction from the yearly high (0.7414) may turn out to be an exhaustion in the bullish trend rather than a change in behavior as the RBA moves to the sidelines ahead of 2021, and key market trends may keep the exchange rate afloat as the US Dollar broadly reflects an inverse relationship with investor confidence.