EUR/USD trades higher for the fourth consecutive day as the US Dollar weakness against most of its European counterparts, and the exchange rate appears to be on track to test the monthly high (1.1920) as it extends the series of higher highs and lows from the previous week.

EUR/USD appears to be benefitting from Moderna’s developmental vaccine as the US Dollar broadly reflects an inverse relationship with investor confidence, and key market themes may continue to sway the exchange rate over the remainder of the month amid the limited reaction to the US Retail Sales report.

EUR/USD showed a rather muted reaction to the fresh data prints coming out of the US even though household spending increased 0.3% in October versus expectations for 0.5% print, and swings in risk appetite may continue to sway the exchange rate as the Federal Reserve appears to be in no rush to alter the path for monetary policy.

Fed Vice-Chair Richard Clarida emphasized that “the recovery from the pandemic shock in the U.S. can potentially be much more rapid than it was from the global financial crisis” while speaking at an event held by Brookings Institution, with the permanent voting-member on the Federal Open Market Committee (FOMC) going onto say that the central bank “will continue to monitor developments and assess how our ongoing asset purchases can best support achieving our maximum-employment and price-stability objectives.”

The comments suggests the FOMC will stick to the sidelines at its last meeting for 2020 as the Fed’s balance sheet approaches the record high, and the central bank may stick to the same script on December 16 as Chairman Jerome Powell and Co. “are committed to using our full range of tools to support the economy and to help assure that the recovery from this difficult period will be as robust as possible.”

It remains to be seen if the update to the Summary of Economic Projections (SEP) will reflect a more detailed forward guidance as the Fed plans to “add two new graphs that show how the balance of participants’ assessments of uncertainty and risks have evolved over time,” but key market trends may persist throughout the remainder of the remainder of the year as the crowding behavior in EUR/USD resurfaces. 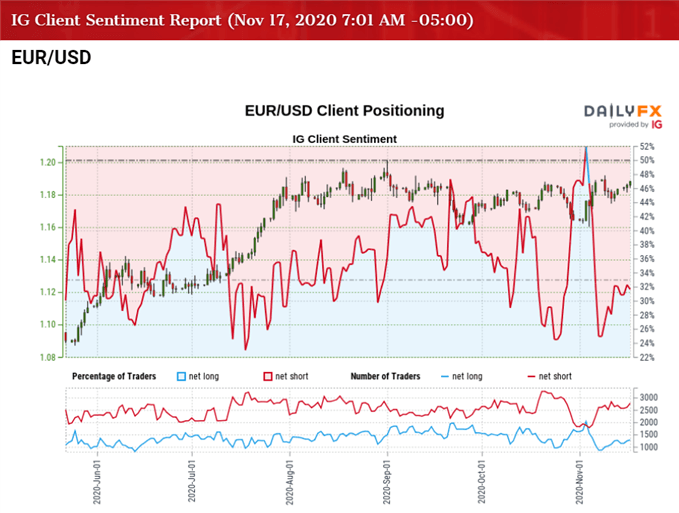 The rise in net-long interest had helped to alleviate the tilt in retail sentiment as only 32.89% of traders were net-long EUR/USD in late-October, while the recent rise in net-short position indicates the crowding behavior could carry into December even though the exchange rate appears to be on track to test the monthly high (1.1920).

With that said, the consolidation from the yearly high (1.2011) may turn out to be an exhaustion in the bullish price action rather than a change in trendas the crowding behavior in EUR/USD resurfaces, and the exchange rate may stage a larger rebound over the coming days as it extends the series of higher highs and lows from the previous week.