AUD/USD consolidates after testing the monthly high (0.7340), but recent price action points to a further appreciation in the exchange rate as it carves a series of higher highs and lows.

Key market themes may keep AUD/USD afloat as the US Dollar broadly reflects an inverse relationship with investor confidence, and the correction from the yearly high (0.7414) appears to have been an exhaustion in the bullish trend rather than a change in behavior as the new measures taken by the Reserve Bank of Australia (RBA) does little to cap the exchange rate.

AUD/USD may continue to appreciate ahead of the RBA’s last meeting for 2020 even though the central bank pushes the official cash rate (OCR) to a fresh record low of 0.10% as Governor Philip Lowe and Co. look towards their non-standard tools to further support the Australian economy.

It seems as though the RBA will utilize its balance sheet rather than implementing a negative interest rate policy (NIRP) as the central bank plans to purchase “$100 billion of government bonds of maturities of around 5 to 10 years over the next six months,” and it remains to be seen if Governor Lowe and Co. will adjust its quantitative easing (QE) program in 2021 as the board reduces the target yield for the 3-year Australian Government bond to around 0.1 percent and insists that “any bonds purchased to support this target would be in addition to the $100 billion bond purchase program.”

Nevertheless, the limited duration surrounding the RBA’s QE program may ultimately act as a backstop for AUD/USD as the Federal Reserve’s balance sheet approaches the record high, and key market trends may carry into the end of the year as Chairman Jerome Powell and Co. vow to “to increase our holdings of Treasury securities and agency mortgage-backed securities at least at the current pace.”

At the same time, the tilt in retail sentiment from earlier has resurfaced even though AUD/USD tests the monthly high (0.7340), with the IG Client Sentiment report showing 30.59% of traders net-long the pair as the ratio of traders short to long stands at 2.27 to 1. 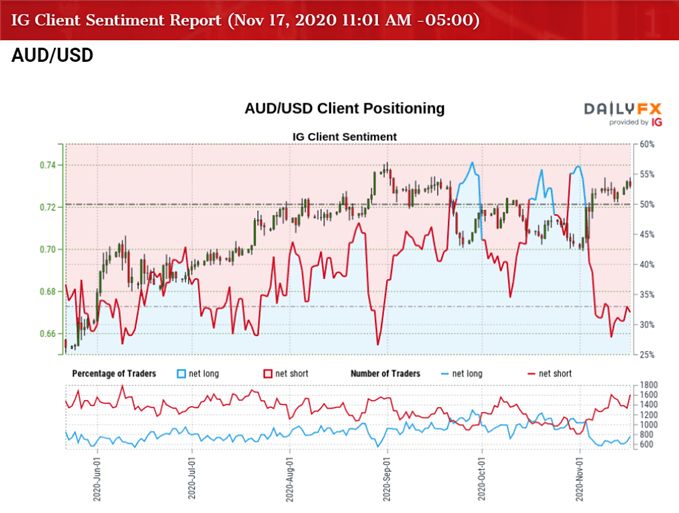 The number of traders net-long AUD/USD is 3.98% lower than yesterday and 13.09% higher from last week, while the number of traders net-short is 7.66% higher than yesterday and 1.21% higher from last week. The rise in net-long position could be in reaction to the recent series of higher highs and lows in the exchange rate, while the increase in net-short interest indicates that the crowding behavior in AUD/USD is likely to persist even though the US Dollar broadly reflects an inverse relationship with investor confidence.

With that said, swings in risk appetite may sway AUD/USD ahead of the RBA meeting on December 1 as the central bank looks poised to retain the current policy, but recent price action points to a further appreciation in AUD/USD as the exchange rate carves a series of higher highs and lows.