NZD/USDapproaches the monthly high (0.6914) as the US Dollar depreciates against commodity bloc currencies, and the exchange rate may trade to fresh yearly highs over the coming days as the Relative Strength Index (RSI) flirts with overbought territory.

NZD/USD largely retains the advance following the Reserve Bank of New Zealand’s (RBNZ) last meeting for 2020 as the US Dollar still reflects an inverse relationship with investor confidence, and swings in risk appetite may continue to influence the exchange rate as Governor Adrian Orr and Co. appear to be in no rush to implement a negative interest rate policy (NIRP).

It seems as though the RBNZ will rely on its balance sheet to support the New Zealand economy as the central bank launches a Funding for Lending Program (FLP) and plans to carry out the Large Scale Asset Purchase (LSAP) Programme of up to $100 billion, and the central bank may merely attempt to buy time at its first meeting for 2021 as “the Committee agreed that it remained appropriate for fiscal policy to play the primary role in bolstering economic outcomes.”

In turn, the RBNZ may endorse a wait-and-see approach on February 24 as “economic outcomes had been more resilient than earlier assumed,” and it remains to be seen if Governor Orr and Co. will push interest rates into negative territory as officials “remain prepared to provide additional support if necessary.”

Until then, key market trends are likely to influence NZD/USD as the Federal Reserve’s balance sheet approaches the record high, with retail positioning highlighting a similar dynamic as the crowing behavior from earlier this resurfaces, with traders net-short the pair since the start of October. 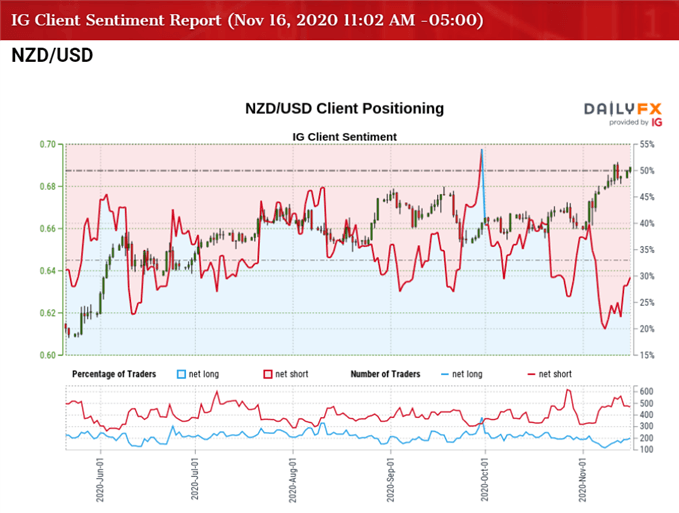 The rise in net-long position comes as NZD/USD approaches the monthly high (0.6914), while the rise in net-short interest has spurred a further tilt in retail sentiment as 29.88% of traders were net-long the pair at the end of October.

With that said, key market trends look poised to persist over the remainder of the month amid the crowding behavior in NZD/USD, and the exchange rate may trade to fresh yearly highs over the coming days if the Relative Strength Index (RSI) pushes into overbought territory to show the bullish momentum gathering pace.