NZD/USD is under pressure after trading to a fresh monthly high (0.6724) earlier this week, and the exchange rate may face a larger pullback going into November as the US Dollar appreciates on the back of waning investor confidence.

NZD/USD appears to have reversed course ahead of the September high (0.6798) as the wave of lockdowns across Europe drags on risk appetite, and the exchange rate may test the October low (0.6547) ahead of the Reserve Bank of New Zealand’s last meeting for 2020 if the recent shift in investor confidence leads to a flight to safety.

Looking ahead, the RBNZ may provide a more detailed forward guidance at its next interest rate decision on November 11 as Governor Adrian Orr insists that there’s “plenty of room” for the board to adjust the Large Scale Asset Purchase (LSAP) Programme, which currently sits at NZ$100 billion, and the New Zealand Dollar may face headwinds over the coming months as the central bank prepares to deploy a slew of new non-standard measures in an effort to stimulate a stronger recovery.

In turn, the decline from the yearly high (0.6798) may turn out to be a change in market behavior rather than an exhaustion in the bullish trend, but the New Zealand Dollar’s 24% surge from the lows of March could be the start of a prolonged period of strength against its US Dollar counterpart as the break above long-term trend resistance hints a cyclical upturn is afoot. 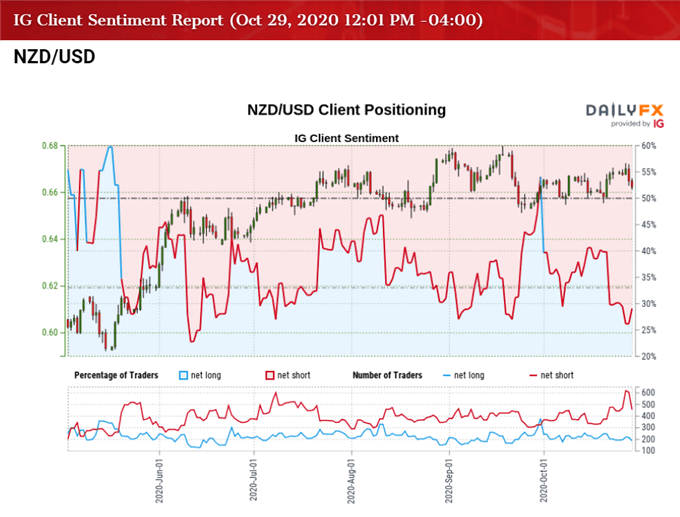 The decline in net-long position comes as NZD/USD falls back from the monthly high (0.6724), while the rise in net-short interest has generated a further tilt in retail sentiment as 40.50% of traders were net-long the pair during the previous week.

The crowding behavior may keep NZD/USD within a broad range ahead of the major event risks in November as it flops ahead of the September high (0.6798), but the US Dollar may continue to show an inverse relationship with investor confidence as the Federal Reserve’s balance sheet climbs to a fresh record high in October.

With that said, NZD/USD may attempt to test the October low (0.6547) if the shift in risk appetite turns into a flight to safety, and the Relative Strength Index (RSI) may highlight a similar dynamic should the indicator fail to retain the upward trend carried over from the end of September.