The price of gold continues to track the opening range for October amid ongoing talks for another round of US fiscal stimulus, and key market trends may keep the precious metal afloat as Federal Reserve officials retain a dovish forward guidance for monetary policy.

The price of goldclimbs back above the $1900 handle following the failed attempt to test the monthly low ($1873), and the precious metal may continue to show an inverse relationship with the US Dollar as the Federal Reserve retains a dovish forward guidance, while the DXY Index trades within a Descending Channel. 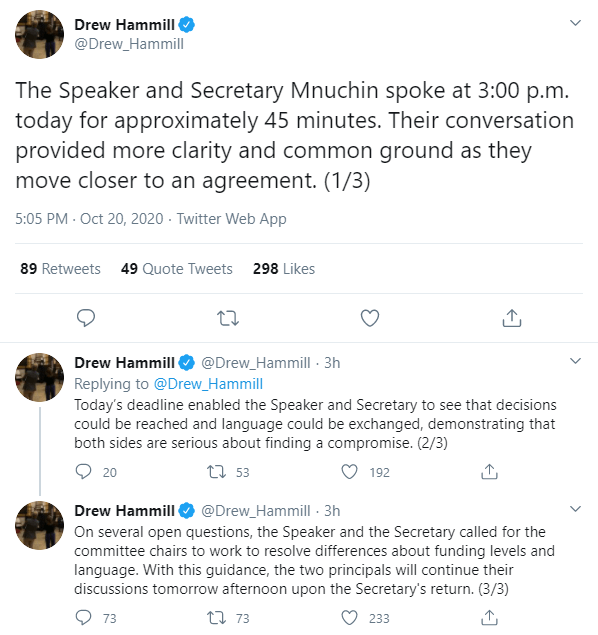 Looking ahead, key developments coming out of the US may influence gold prices as Drew Hammill, the Deputy Chief of Staff for House Speaker Nancy Pelosi, tweets that the Speaker and Treasury Secretary Steven Mnuchin are moving “closer to an agreement,” with negotiations scheduled to resume “tomorrow afternoon upon the Secretary's return.”

Another fiscal stimulus package may keep the Federal Open Market Committee (FOMC) on the sidelines as Vice Chair Richard Clarida emphasizes that “the Committee made important changes to our policy statement that upgraded our forward guidance about the future path of the federal funds rate.”

In a recent speech, Vice Chair outlined an outcome-based approach for monetary policy as FOMC officials “expect it will be appropriate to maintain the current 0 to 1/4 percent target range for the federal funds rate until labor market conditions have reached levels consistent with the Committee's assessments of maximum employment, until inflation has risen to 2 percent, and until inflation is on track to moderately exceed 2 percent for some time.”

At the same time, Clarida warned that “additional support from monetary—and likely fiscal—policy will be needed” for the US economy to return to pre-pandemic conditions, and current market trends may persist ahead of the next FOMC interest rate decision on November 5 as the central bank vows to “increase our holdings of Treasury securities and agency mortgage-backed securities at least at the current pace.”

In turn, key themes resulting from the COVID-19 pandemic may carry into the end of the month as the Fed’s balance sheet approaches the peak from June, and the price of gold may continue to reflect an inverse relationship with the reserve currency as the net-long US Dollar bias from earlier this year largely remains in place. 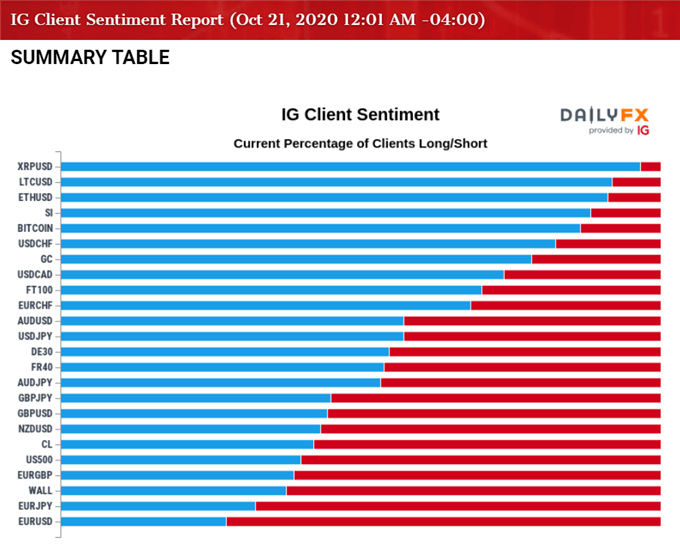 The IG Client Sentiment report continues to show the crowding behavior in the Greenback as traders are net-long USD/CHF, USD/CAD and USD/JPY, while the crowd is net-short GBP/USD, NZD/USD and EUR/USD. However, the Australian Dollar continues to buck the trend as 56.12% of traders are current net-long the pair compared to 50.40% earlier this week.

Nevertheless, the low interest environment along with the ballooning central bank balance sheets may continue to heighten the appeal of gold as an alternative to fiat-currencies, and it remains to be seen if the decline from the record high ($2075) will turn out to be a change in market behavior or an exhaustion in the bullish trend as the price of gold no longer traders to fresh yearly highs during every single month in 2020.

With that said, the price of gold may continue to consolidate as US fiscal authorities try to pass another stimulus package, and the failed attempt to test the monthly low ($1873) may push the precious metal towards the monthly high ($1933) as bullion retains the opening range for October.