NZD/USD tracks the monthly range as the Reserve Bank of New Zealand (RBNZ) shows a greater willingness to boost its non-standard measures, but the update to New Zealand’s Consumer Price Index (CPI) may prop up the exchange rate as the headline reading for inflation is expected to recover in the third quarter.

NZD/USD approaches the monthly low (0.7006) even though RBNZ Governor Adrian Orr warns that the limits on high loan-to-value ratio (LVR) lending could be reestablished as the central bank head insists that there’s “plenty of room” for the board to adjust the Large Scale Asset Purchase (LSAP) Programme, which currently sits at NZ$100 billion.

Governor Orr went onto say that the RBNZ is preparing a monetary stimulus package that “can be highly effective and highly efficient,” while speaking at the Institute of Finance Professionals New Zealand (INFINZ), and it remains to be seen if the RBNZ will make a major announcement at its last meeting for 2020 as the economy recovers from the COVID-19 pandemic.

In turn, the update to New Zealand’s CPI may keep Governor Orr and Co. on the sidelines as the headline reading for inflation is projected to increase to 1.7% from 1.5% in the second quarter of 2020, and key market trends may sway NZD/USD ahead of the RBNZ meeting on November 11 as the US Dollar continues to reflect an inverse relationship with investor confidence. 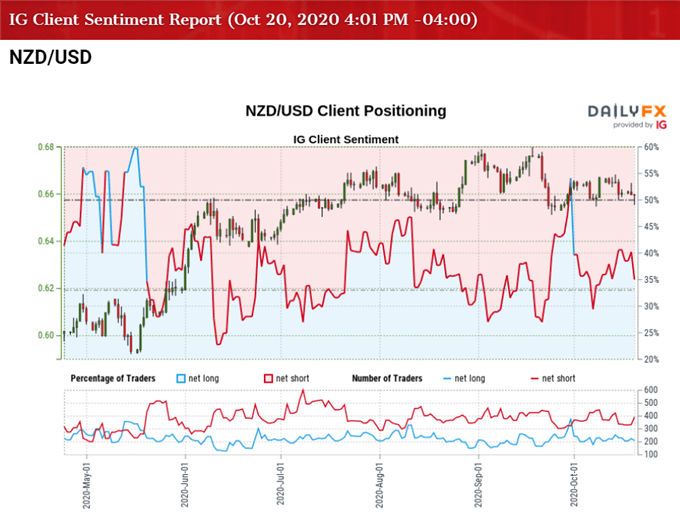 The rise in net-long position comes as NZD/USD tracks the monthly range, while the decline in net-short interest has helped to alleviate the tilt in retail sentiment as 39.91% of traders were net-long the pair last week. However, the crowding behavior in NZD/USD suggests the pullback from the yearly high (0.6798) could turn out to be an exhaustion in the bullish trend rather than a change in market behavior, and key market themes look poised to persist over the remainder of the month as the Federal Reserve’s balance sheet approaches the peak from June.

With that said, NZD/USD may face range bound conditions as the decline from earlier this week fails to produce a test of the monthly low (0.7006), and an improvement in New Zealand’s CPI may push the exchange rate back towards the monthly high (0.6682) as the Relative Strength Index (RSI) breaks out of the downward trend carried over from September.