EUR/USD bounce back from the weekly low (1.1720) even though a growing number of European Central Bank (ECB) officials pledge to further support the Euro Area, and the exchange rate may continue to retrace the decline from the yearly high (1.2011) as it clears the monthly opening range, while the Relative Strength Index (RSI) breaks out of the downward trend carried over from late July.

EUR/USD pares the decline from earlier this month as the Euro outperforms against most of its major counterparts, and the lack of momentum to test the monthly low (1.1696) undermines the recent series of lower highs and lows in the exchange rate as the ECB appears to be in no rush to alter the path for monetary policy.

A recent speech by ECB board member Francois Villeroy de Galhau suggests the central bank will rely on its current tools to support the Euro Area as the current stance is “appropriate,” with the official going onto say that the Governing Council “will be ready to act further if needed.”

It seems as though the ECB will retain a dovish forward guidance as the central bank rules out a V-shape recovery, but President Christine Lagarde and Co. may stick to the sidelines at the next interest rate decision on October 29 as the account of the September meeting reveals that the “PEPP (Pandemic Emergency Purchase Programme) envelope would likely have to be used in full to provide the necessary accommodation to offset the downward impact of the pandemic on the path of inflation.”

In turn, the ECB may continue to tweak its current tools as “it was noted that further cuts in policy rates and changes to the conditions of the TLTROs (Targeted Longer-Term Refinancing Operations) were also part of the toolkit for providing additional monetary policy accommodation, if necessary,” and little indications for more non-standard measures may keep current market trends in place as a growing number of Governing Council officials tame speculation for a Euro intervention.

At the same time, the tilt in retail sentiment looks poised to persist even though the Federal Reserve’s balance sheet approaches the peak from June as traders have net-short EUR/USD since mid-May. 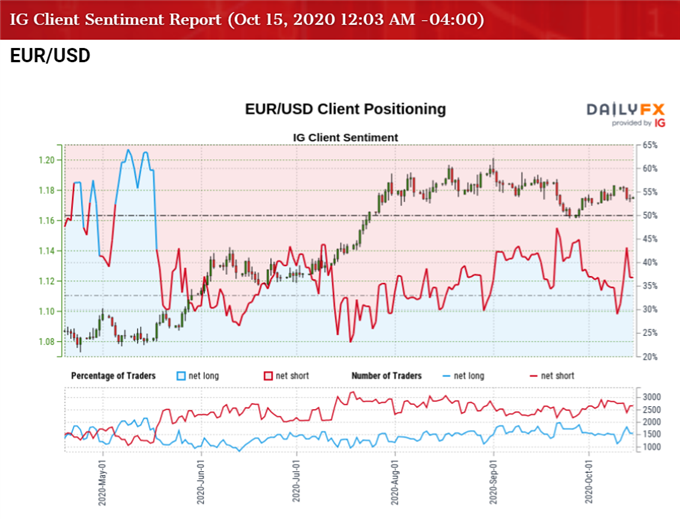 The rise in net-long position comes as EUR/USD appears to be reversing course ahead of the monthly low (1.1696), while the decline in net-short interest has helped to alleviate the tilt in retail sentiment as 36.53% of traders were net-long the pair earlier this week.

With that said, the crowding behavior in EUR/USD looks poised to persist over the remainder of the month, and the pullback from the yearly high (1.2011) may prove to be an exhaustion in the bullish trend rather than a change in market behavior as the Relative Strength Index (RSI) breaks out of the downward trend carried over from late July.