USD/CAD carves a bullish outside day (engulfing) candle formation as it bounces back from a fresh monthly low (1.3099), but recent developments in the Relative Strength Index (RSI) cast a bearish outlook for the exchange rate as the indicator establishes a downward trend in October.

USD/CAD struggled to retain the advance from the September low (1.2994) as the rebound failed to produce a test of the August high (1.3451), with the RSI snapping the upward trend from September as the US Dollar weakened on the back of improving risk appetite.

Looking ahead, key market trends may continue to influence USD/CAD as the Greenback shows an inverse relationship with the investor confidence, and it remains to be seen if the improvement in risk appetite will carry into the end of the month as US President Donald Trumpinsists “Covid Relief Negotiations are moving along.”

However, USD/CAD may trade within a more defined range as the bullish outside day (engulfing) candle formation points to a larger rebound, and the exchange rate may consolidate ahead of the next Federal Reserve interest rate decision on November 5 as the central bank prepares a “more explicit outcome-based forward guidance.”

The Federal Open Market Committee (FOMC) may show a greater willingness to further support the US economy as Chairman Jerome Powell and Co. remain “committed to using the Federal Reserve's full range of tools in order to support the U.S. economy,” but it seems as though the central bank is in no rush to deploy more non-standard tools as most Fed officials judged that “yield caps and targets would likely provide only modest benefits in the current environment.”

In turn, the Fed may tweak its current tools to generate a stronger recovery as Cleveland Fed President Loretta Mester, a 2020 voting-member on the FOMC, states that the committee could “shift to longer-term Treasuries, as we did during the Great Recession, if we needed more accommodation,” and the unprecedented efforts taken by major central banks may continue to shore up investor confidence as the Fed’s balance sheet approaches the peak from June.

As a result, key market trends look poised to persist as the crowding behavior in USD/CAD carries into October, with traders net-long the pair since mid-May. 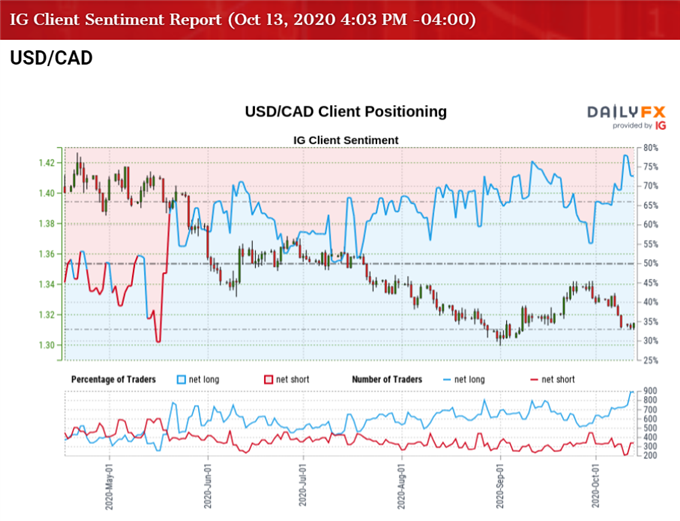 The decline in net-short position could be a function of profit-taking behavior as USD/CAD bounces back from a fresh monthly low (1.3099), but the rise in net-long interest has spurred a greater tilt in retail sentiment as 67.15% of traders were net-long the pair last week.

With that said, the crowding behavior looks poised to persist even though USD/CAD struggles to retain the advance from the September low (1.2994), and the Relative Strength Index (RSI) undermines the recent rebound in exchange rate as the indicator establishes a downward trend in October.