NZD/USD pushed to a fresh monthly high (0.6673) amid growing hopes for another round of US fiscal stimulus, and recent developments in the Relative Strength Index (RSI) indicate a larger recovery in the exchange rate as the oscillator breaks out of the downward trend established in September.

NZD/USD bounced back from the monthly low (0.6547) as US President Donald Trump tweets “Covid Relief Negotiations are moving along,” and the ongoing efforts by fiscal as well as monetary authorities may continue to drag on the US Dollar as the reserve currency reflects an inverse relationship with investor confidence.

In turn, swings in risk appetite may continue to sway NZD/USD as the Federal Reserve vows to “increase its holdings of Treasury securities and agency MBS (mortgage-backed securities) at least at the current pace,” but it remains to be seen if US lawmakers will pass another stimulus bill ahead of the election on November 3 amid the deadlock in Congress.

Fears of a protracted recovery may push the Federal Open Market Committee (FOMC) to further support the US economy as the central bank pledges to provide “more explicit outcome-based forward guidance,” and the Fed may show a greater willingness to deploy more non-standard measures as Cleveland Fed President Loretta Mester, a 2020 voting-member on the FOMC, states that the committee could “shift to longer-term Treasuries, as we did during the Great Recession.”

However, the FOMC appears to be in no rush to alter the path for monetary policy as the Summary of Economic Projections (SEP) showed the longer run interest rate forecast unchanged from the June meeting, and Chairman Jerome Powell and Co. may stick to the sidelines at the next interest rate decision on November 5 even though the central bank plans to “achieve inflation that averages 2 percent over time.”

As a result, key market trends look poised to persist in October, with the crowding behavior in NZD/USD resurfacing as the recent flip in retail positioning quickly dissipates. 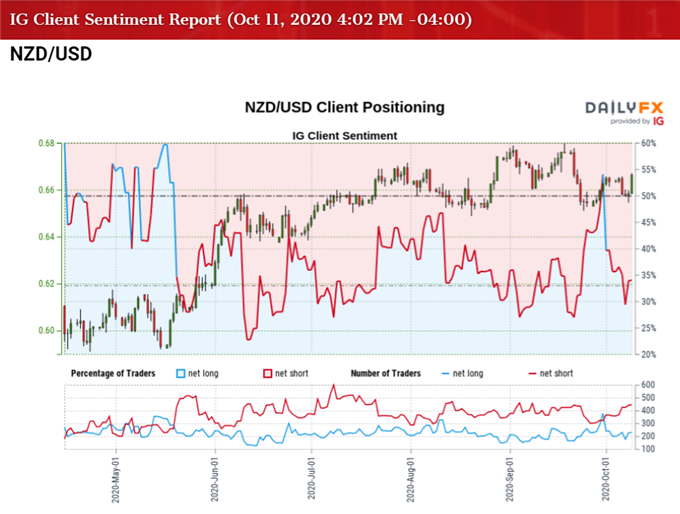 The small rise in net-long position comes as NZD/USD bounces back from the monthly low (0.6547), but the rise in net-short interest has spurred a greater tilt int retail sentiment as 35.61% of traders were net-long the pair during the previous week.

With that said, the pullback from the yearly high (0.6798) may turn out to be an exhaustion in the bullish trend rather than a change in NZD/USD behavior amid the failed attempt to test the August low (0.6489), with the Relative Strength Index (RSI) now highlighting a similar dynamic as it breaks out of the downward trend carried over from September.