The price of gold pares the decline from earlier this week on the back of US Dollar weakness, but the advance from the September low ($1849) may give way to range bound conditions as the Relative Strength Index (RSI) continues to track the downward trend carried over from August.

The price of gold rebounds from a fresh monthly low ($1873) as the Federal Open Market Committee (FOMC) Minutes warn of a protracted recovery, and the central bank may gradually change its tone ahead of 2021 as “most participants supported providing more explicit outcome-based forward guidance.”

It remains to be seen if the FOMC will adjust the forward guidance at the next interest rate decision on November 5 as US President Donald Trump tweets that “immediately after I win, we will pass a major Stimulus Bill,” and the Fed may stick to the same script ahead of its last meeting in December as the central bank vows to “increase its holdings of Treasury securities and agency MBS (mortgage-backed securities) at least at the current pace.”

However, in a recent speech, Boston Fed President Eric Rosengren warns that “the slow build-up of risk in the low-interest-rate environment that preceded the current recession likely will make the economic recovery from the pandemic more difficult,” and goes onto say that “if we expect to remain in a low-interest-rate environment for a protracted period of time, we need to take more precautions against financial stability risks for when the next economic shock hits.”

The comments suggest the FOMC will continue to rely on its current tools to support the US economy even though Chairman Jerome Powell and Co. plan to “achieve inflation that averages 2 percent over time,” and it seems as though the FOMC is in no rush to deploy more non-standard measures as most Fed officials judged that “yield caps and targets would likely provide only modest benefits in the current environment.”

In turn, the price of gold may continue to show an inverse relationship with the US Dollar as current market trends remain in place, and future updates regarding the Fed’s balance sheet may sway investor confidence as it approaches the peak from June, with the latest update coming in at $7.075 trillion versus $7.056 trillion in the week of September 30. 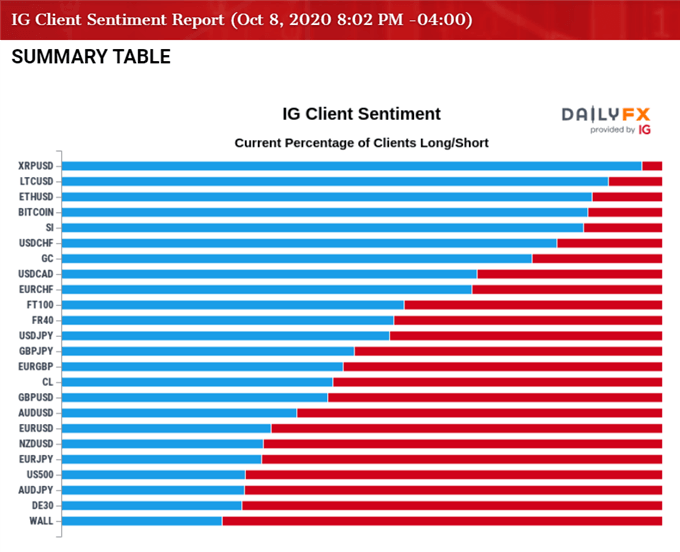 At the same time, the crowding behavior in the US Dollar has resurfaced in October as the IG Client Sentiment report shows retail traders net-long USD/CHF, USD/CAD and USD/JPY, while the crowd is net-short GBP/USD, AUD/USD, EUR/USD and NZD/USD.

The return of the net-long US Dollar bias suggests key market themes resulting from the COVID-19 pandemic will persist as the low interest environment along with the ballooning central bank balance sheets heighten the appeal of gold as an alternative to fiat-currencies, and the decline from the record high ($2075) may turn out to be an exhaustion in the bullish trend rather than a change in market behavior even though bullion no longer traders to fresh yearly highs during every single month in 2020.

With that said, the price of gold may continue to reflect an inverse relationship with the Greenback, but the precious metal may face range bound conditions as long as the Relative Strength Index (RSI) tracks the downward trend carried over from August.