NZD/USD slips to a fresh weekly low (0.6571) even though Federal Reserve officials warn of a protracted recovery, and the bearish price action may persist over the coming days as the Relative Strength Index (RSI) continues to track the downward trend established in September.

NZD/USD struggles to retain the advance from the September low (0.6512) as the US Dollar appreciates on the back of waning risk appetite, and swings in investor confidence may continue to sway the exchange rate as the Federal Open Market Committee (FOMC) vows to “increase its holdings of Treasury securities and agency MBS at least at the current pace.”

The FOMC Minutes suggest the central bank is in no rush to alter the path for monetary policy as “participants observed that the incoming data indicated that economic activity was recovering faster than expected from its depressed second-quarter level,” but “many participants noted that their economic outlook assumed additional fiscal support and that if future fiscal support was significantly smaller or arrived significantly later than they expected, the pace of the recovery could be slower than anticipated.”

At the same time, “most participants raised the concern that fiscal support so far for households, businesses, and state and local governments might not provide sufficient relief to these sectors,” with the statement going onto say that Fed officials “remained concerned about the possibility of additional virus outbreaks that could undermine the recovery.”

It seems as though the FOMC will gradually change its tone ahead of 2021 as “most participants supported providing more explicit outcome-based forward guidance,” but the transcript emphasized that an “outcome-based forward guidance for the federal funds rate of this type was not an unconditional commitment to a particular path” even though the Summary of Economic Projections (SEP) showed the longer run interest rate forecast unchanged from the June meeting.

It remains to be seen if the FOMC will adjust the forward guidance at the next interest rate decision on November 5 as US President Donald Trump tweets that “immediately after I win, we will pass a major Stimulus Bill,” and more of the same from the FOMC may keep key market trends in place as Chairman Jerome Powell and Co. remain “committed to using the Federal Reserve's full range of tools in order to support the U.S. economy.”

Until then, swings in risk appetite may continue to sway NZD/USD amid the inverse relationship between the US Dollar and investor confidence, but it seems as though the tilt in retail sentiment will persist as the recent flip in positioning quickly dissipates. 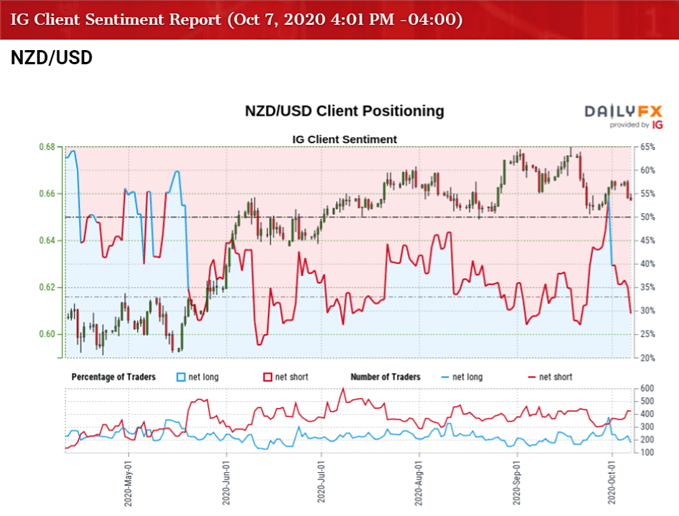 The decline in net-long position could be a function of stop-loss orders getting triggered as NZD/USD struggles to retain the advance from the September low (0.6512), while the jump in net-short interest suggests key market trends will persist in October as the crowding behavior from earlier this year resurfaces.

With that said, the pullback from the yearly high (0.6798) may turn out to be an exhaustion in the bullish trend rather than a change in NZD/USD behavior amid the failed attempt to test the August low (0.6489), but the Relative Strength Index (RSI) warns of a further decline in the exchange rate as the indicator continues to track the downward trend established in September.