NZD/USD appears to have reversed coursed following the failed attempt to test the August low (0.6489), and the Relative Strength Index (RSI) may show the bearish momentum abating as it appears to be on the cusp of breaking out of a downward trend.

NZD/USD trades in a narrow range following the limited reaction to the US Non-Farm Payrolls (NFP) report, and it seems as though key market trends will continue to influence the exchange rate as major central banks rely on their non-standard tools to combat the economic shock from COVID-19.

A further improvement in risk appetite may fuel the rebound from the September low (0.6512) as the Federal Reservevows to “increase its holdings of Treasury securities and agency mortgage-backed securities at least at the current pace,” and the decline from the yearly high (0.6798) may turn out to be an exhaustion in the bullish trend rather than a shift in NZD/USD behavior even though the Reserve Bank of New Zealand (RBNZ) appears to be on track to deliver another round of monetary stimulus at its last interest rate decision for 2020.

It remains to be seen if the RBNZ will unveil a slew of new tools at its next meeting on November 11 as the central bank insists that “that a package of an FLP (Funding for Lending Programme) and a lower or negative OCR (official cash rate) could provide an effective way to deliver additional monetary stimulus,” and Governor Adrian Orr and Co. may continue to endorse a dovish forward guidance in 2021 as officials “agreed that monetary policy will need to provide significant economic support for a long time to come to meet the inflation and employment remit.”

In turn, the New Zealand Dollar is likely to face headwinds if the RBNZ continues to push monetary policy into uncharted territory, but more of the same from Governor Orr and Co. may keep broader market trends in place as the central bank looks to keep the Large Scale Asset Purchase (LSAP) Programme at NZ$100 billion.

Until then, NZD/USD may continue to reflect the inverse relationship between the US Dollar and investor confidence, but it seems as though the tilt in retail sentiment will persist in October as the recent flip in positioning quickly dissipates. 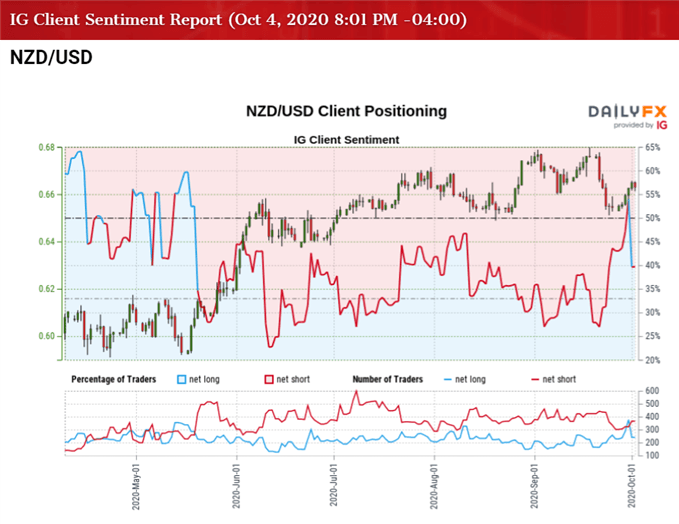 The decline in net-long position could be a function of profit-taking behavior as NZD/USD trades in a narrow range following the rebound from the September low (0.6512), but the rise in net-short interest suggests key market trends will persist over the coming days as the crowding behavior from earlier this year returns.

With that said, the pullback from the yearly high (0.6798) may turn out to be an exhaustion in the trend rather than a change in NZD/USD behavior, and the Relative Strength Index (RSI) may show the bearish momentum abating as it appears to be on the cusp of snapping the downward trend carried over from the previous month.